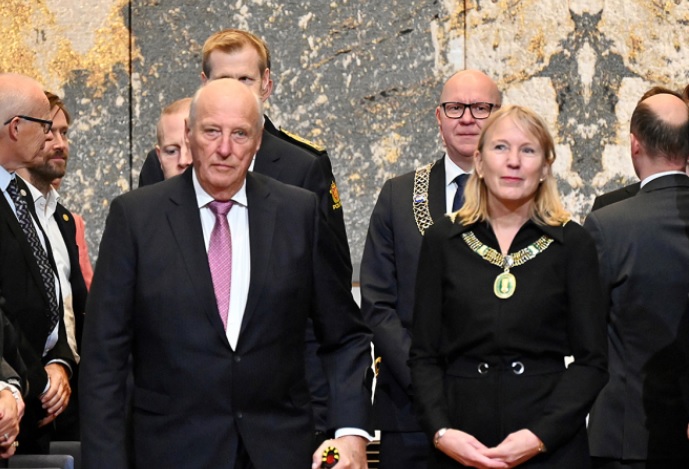 King Harald was received by Rector Margareth Hagen on his arrival at the University Hall on October 25th 2021. This was the beginning of a grand celebration for the university. Three student choirs had joined forces and performed traditional west Norwegian songs before the principal welcomed everyone. Minister of Research and Higher Education, Ola Borten Moe, spoke on behalf of the government, and Prime Minister Jonas Gahr Støre sent a digital greeting.

The university has found three precious treasures on the occasion of the anniversary, and these are shown in a rare exhibition that the King got to take a closer look at. The first map showing Norway alone is one of the treasures. It is a section of the Dutch cartographer Johannes Blaeus’ map from the 17th century and shows southern Norway in 1662. King Harald received a copy of the map as a gift during his visit.

The Aga document from 1293 is the oldest medieval document in the University of Bergen’s collections. Here it is stated a settlement has been reached between the farmers on Indre and Ytre Bleie about common fences, harbour corridors and roads. The book “Civitates Orbis Terrarum” – The Cities of the World – was published more than 400 years ago. The book contains 546 bird’s-eye prospects of cities from around the world, including Bergen. This is the first depiction of the western Norwegian village that exists.