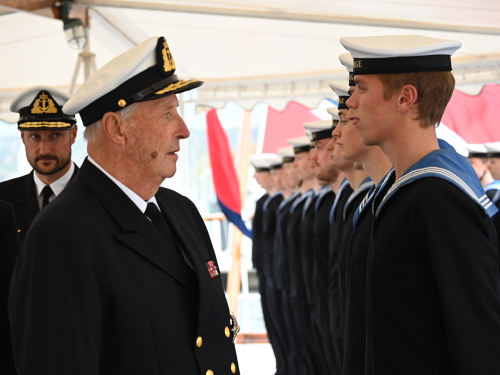 King Harald, accompanied by Queen Sonja, has announced the end of this year’s season for the Norwegian Royal Yacht “KS Norge”. This year, the ship has not been used as much in official contexts, due to the ongoing pandemic. As a result, the ship has been used much more than usual by the royals privately, especially during the summer holidays.

During the now ended summer season, the crew consisted of 53 people, 17 officers and 36 other crew members. During winter, the crew is reduced to approximately 25 people. The duties are mainly guarding the ship and maintenance during the winter. In February, the vessel receives new officers and military crew who undergo theoretical and practical training for the upcoming season.

During the ceremony, the King inspected this year’s crew. He also examined the ship and made sure everything was as it should be before having a short chat with the captain and another military commander on board the boat. The King then announced with his official approval that everything was as it should be and that the royal ship is officially ready to spend the winter in dock before the next season which will begin mid-May 2022.

The Royal Yacht has been used for many large celebrations before. When King Harald and Queen Sonja celebrated their 60th birthdays in the summer of 1997, royals from all over Europe participated in the event. The guests were invited on a trip from Trondheim to Lofoten and were accommodated aboard the Royal Yacht.

The Norwegian Royal Yacht is one of the world’s two remaining royal yachts. The other is the Danish Royal Yacht, Dannebrog; the British Royal Yacht, Britannia was decommissioned in 1997. The Royal Yacht was a gift from the people of Norway to King Haakon VII in 1947, purchased in the wake of a nationwide collection effort. The ship is owned by His Majesty The King but is manned and maintained by the Royal Norwegian Navy.

In July 1947, the British ship “Philante” was bought for 1.5 million Norwegian crowns and would later become the “Norge.” Before the King could use the boat, the ship had to be rebuilt. In the years that followed, King Haakon used the vessel on his journeys along the long Norwegian coast and travelled to foreign countries on board it. In June 1955, King Haakon used to ship on a visit to Molde. This was King Haakon’s last trip with the ship; he died in 1957.

King Olav took over the ship after his father’s death in 1957. King Olav followed his father’s traditions and used the royal boat both privately and officially. In the winter of 1985, the ship was to be repaired and upgraded at Horten Naval Base. During welding work, there was a fire that spread rapidly to the entire ship. When the fire was put out, the ship was completely scorched. The King decided that the vessel should be rebuilt.

One year after the fire, King Olav again took over the ship which was in far better technical condition than it had been before the blaze. King Harald took over the yacht upon King Olav’s death in 1991. King Harald actively uses the ship both in official journeys at home and abroad and as a private home when he participates in international regattas.