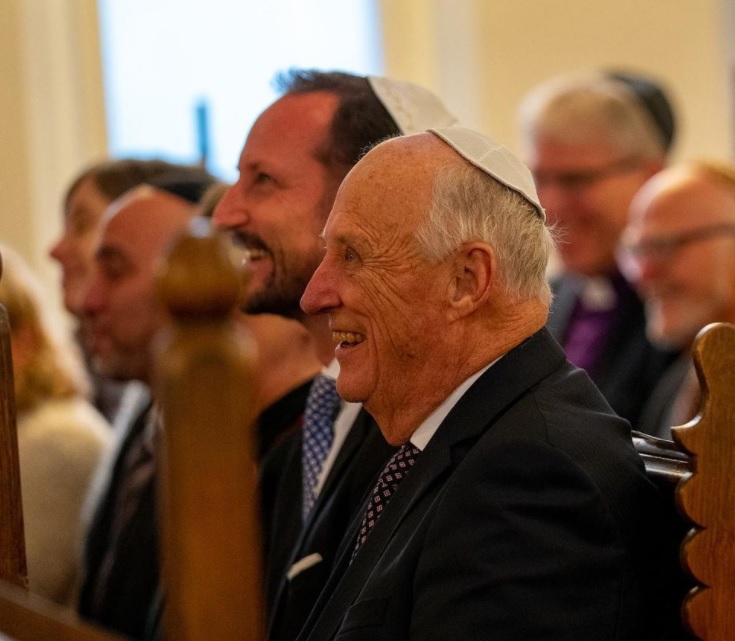 King Harald and Crown Prince Haakon of Norway have marked the 100th anniversary of the Synagogue in Oslo.

They joined celebrations on November 25th 2021. The King and Crown Prince were received by Oslo’s mayor, Marianne Borgen, chairman Ronan Bahar, rabbi Joav Melchior and deputy chairman Anne Sender. Children from the Jewish kindergarten welcomed the Royals outside the synagogue. The government was represented by Minister Kjersti Toppe.

The celebration in the synagogue consisted of speeches and music including performances by the congregation’s children’s choir, and the keynote address was given by Chief Rabbi Michael Melchior. The King’s Prayer was read in both Norwegian and Hebrew. At the end of the ceremony, King Harald was presented with the first copy of the prayer book Siddur in Norwegian translation.

The synagogue was Norway’s first non-Christian house of worship when it was established in 1920. The anniversary was originally supposed to have been marked last year, but was postponed due to the pandemic. The 100th anniversary is a celebration of both those who built the synagogue, synagogue life and the entire Jewish community in Norway.

In 1892, Norwegian Jews decided to establish a congregation in Oslo – The Mosaic Faith Society. In the beginning, the congregation had services in rented premises, but eventually a fund was formed to finance a synagogue building. After a one-acre plot in the area called St. Hans-Haugen was donated in 1916, the building plans gained momentum and in 1920 the synagogue was completed and could be consecrated as Norway’s first non-Christian house of worship since the Viking Age.