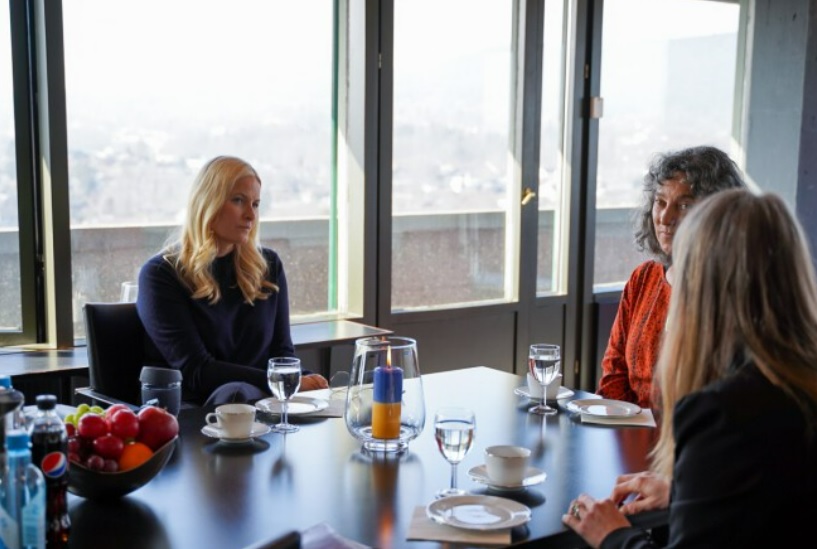 Crown Princess Mette Marit of Norway has met Ukrainian refugees who have arrived in her home municipality of Asker to welcome them and to find out more about how the area is working to facilitate the reception of many Ukrainian refugees in the future.

In Asker, on March 25th 2022, the Crown Princess and Mayor Lene Conradi met two siblings who have been directly affected by the war – an older sister who already lived in Norway before the war in Ukraine broke out, and a younger brother who has recently fled to Norway. Their parents are still in Ukraine, as are many friends and acquaintances. In a conversation with the Crown Princess, the siblings told about what they have experienced recently.

Municipalities around Norway are now preparing to settle refugees from Ukraine. Many in Norway will have Ukrainian neighbours in the future. Asker municipality has been asked by the Norwegian Directorate for Integration and Diversity to settle 305 refugees, of which 20 are unaccompanied minors.

After the meeting with the siblings from Ukraine, the Norwegian Crown Princess was briefed on what is now being done to take care of the refugees who are settling in the municipality. Mayor Lene Conradi and Karin Helena Buberg, acting business manager for inclusion and diversity in Asker municipality, told about how they work to safeguard the refugees’ rights and needs.

Children and young people who come as unaccompanied minors are closely monitored by the municipality, which helps them with, among other things, housing, schooling and health follow-up. The municipality works closely with various actors, such as voluntary organizations and the business community, to create a safe and good local environment for those who have already arrived.