As a little taste of the Crown Princess “literature metro” next week, Her Royal Highness yesterday held a writing school at the Skaugum Estate for Oslo’s youth. On Monday, Crown Princess Mette-Marit invited young people from eight secondary schools to the course – all with a particular interest in learning more about writing. The young people came from the schools in Oslo at Stovner, Hellerud, Etterstad, Persbråten, Ullern and Rosenvilde, Oslo Trade Gymnasium and Oslo Cathedral School.

At Skaugum the Crown Princess joined up with a number of Norwegian authors to teach the youth more about books and literature. One of them was author Arne Svingen; he said that “Instagram is like running 100 metres. A novel is a marathon”. 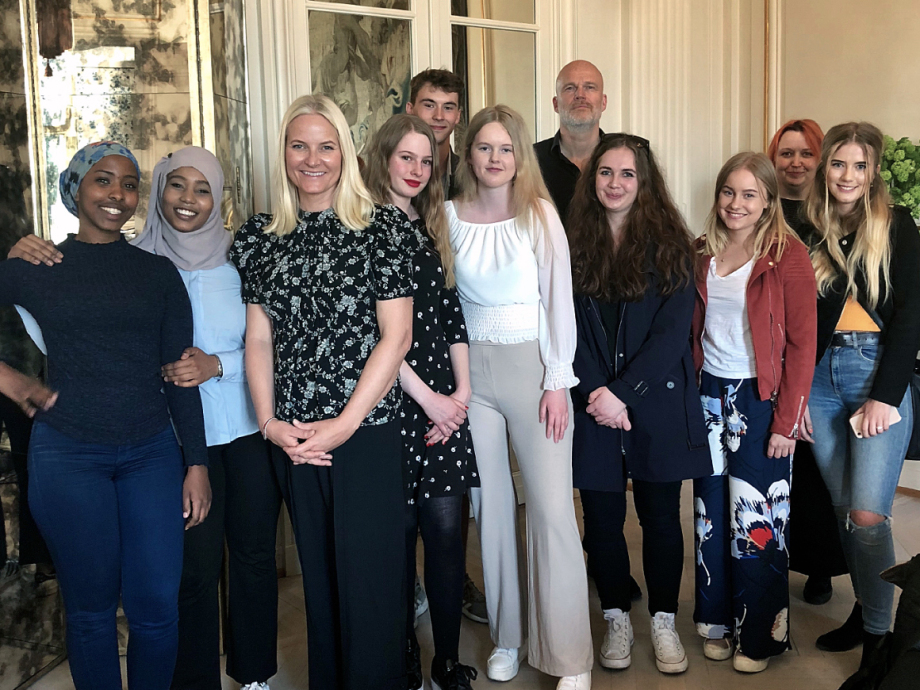 Her Royal Highness together with several of the young people who participated in the writing course. Photo: The Norwegian Royal Court.

Because of her health, Her Royal Highness Crown Princess Mette-Marit has chosen to switch out her annual “literature train” to a more urban “literature metro.” So, this year she will be joined at some of the events by her husband, Crown Prince Haakon of Norway.

The Crown Princess said: “After good inputs, it has now become the ‘literature metro.’ We have invited many writers, but also hip hop and slam poets. I am incredibly grateful to everyone who has contributed to this being a reality; all the authors and artists, the metro system, Oslo city and Bærum municipality, Deichman library and Bekkestua libraries. I just think that this will be really fun.”

The main goal of this year’s short travel is to reach young people between the ages of 15 and 25. The Crown Prince and Crown Princess will also in connection to this event host an author school for 60 people at their home, the Skaugum Estate in Asker. Royal Central will cover some of the events during this year’s “literature metro” and bring you the latest news.

The “literature metro” will start on Kolsås in the west of Oslo and work its way tough the city to Stovner in the east. There will be many stops on the way at different stations. The journey will take place on 8 and 9 May. Royal Central will follow Her Royal Highness on the literature metro’s day two, on Thursday next week.

Stay tuned for the latest on the Crown Princess’s project.