On Wednesday of this week, His Royal Highness Crown Prince Haakon of Norway visited the most northern parts of his father’s kingdom. The Crown Prince visited Lakselv in Porsanger Municipality.

Upon arrival to the small town, His Royal Highness was greeted and warmly welcomed by Mayor Aina Borch and acting County Governor of Finnmark, Stian Lindgård. The visit then continued to Bærtua kindergarten. This kindergarten is unique because they take care of Norway’s historical northern minorities. They have their own Sami-department, and this autumn, they established their own department for children from the Kven people.

The Crown Prince took the time to talk to the children who came from the Norwegian majority as well as the Sami and Kven minorities. Photo: Sven Gj. Gjeruldsen / Det Kongelige Hoff / The Royal Court

The Crown Prince was really impressed by the students at the school, something he expressed in his speech. Crown Prince Haakon said: “I like meeting young people like you. One reason for it is that youth are creative, have energy and are solution-oriented”.

After visiting the kindergarten, the Crown Prince went on to tour the Lakselv high school, where the students and teachers gathered at the school’s canteen. Lakselv high school has 185 students, and there Crown Prince Haakon learned more about the youth council’s and how they work for the municipality to be a good place for youth from both the Norwegian, Sami and Kven communities. 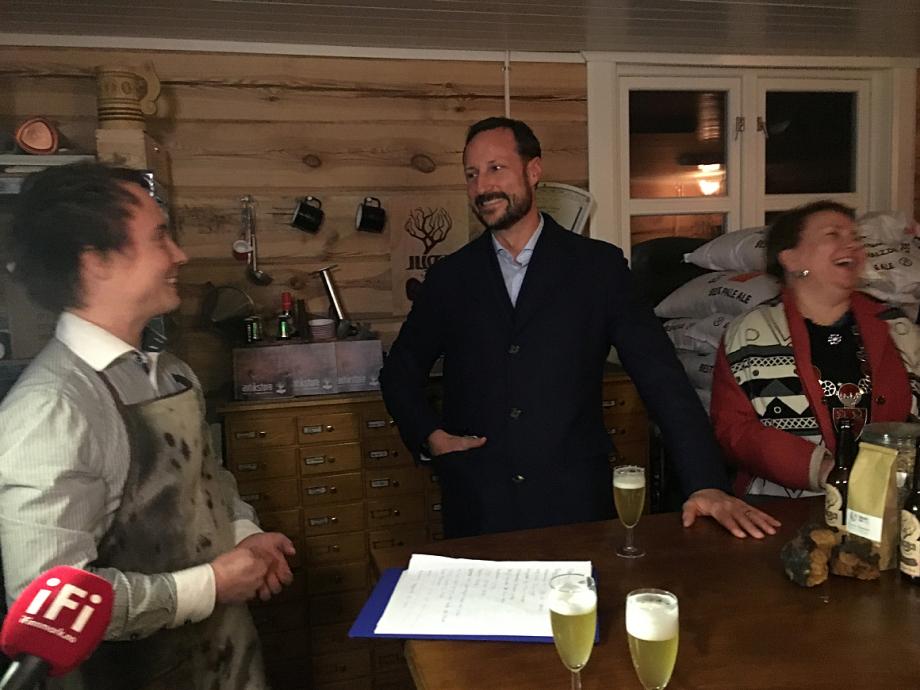 At the end of his visit, the Crown Prince met with local entrepreneurs. His Royal Highness visited the local antiquities store and a small brewery. These stores are both a part of Banak Camp, a family business located in a former military camp built in the period. The Crown Prince met the owner, Alf-Emil Paulsen and got a tour of the brewery. Paulsen was 14-years-old when he began to engage in antiques, and is today the general manager of his own company.

Lakselv is the largest village and administrative centre of Porsanger Municipality in Finnmark county, Norway with a population of 2,283. Lakselv has a wide range of shops and goods compared with the population, and also acts as a trading place for surrounding municipalities. Lakselv has a medium sized airport, Lakselv Airport, Banak, with daily connections to Tromsø.