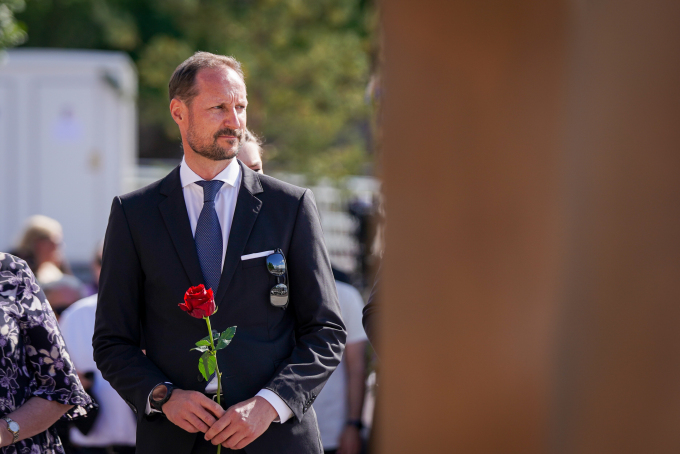 After the glittering celebrations for his daughter’s 18th birthday, it was back to business for Crown Prince Haakon, as he attended the sombre inauguration ceremony for a monument to the victims of the Utøya massacre.

On Saturday, 18 June, the Crown Prince made the journey to the island off the eastern coast of the Tyrifjorden lake together with Prime Minister Jonas Gahr Støre; the two were greeted by a crowd of participants, headed by the Mayor of Hole Syver Leivestad.

The ceremony was broadcast live on Norwegian television and saw artistic performances from Daniel Kvammen, Eva Well Skram and Magnus Aannestad Oseth, as well as speeches from the Prime Minister, the Mayor of Hole, AUF authorities and representatives from the Support Group for victims of the event.

But the most poignant moment of the ceremony was obviously the official reveal of the monument. Seventy-seven members of the AUF, the youth group of the political party that organised the summer camp where the massacre occurred, laid one rose each at the feet of the pillars that make up the building.

The memorial site features 77 bronze columns, one for each of the victims, that snake on the waterfront forming two opposing curves; the peak of one coincides with the point the sun was at when the bomb exploded in Oslo. The peak of the second arch signals the position of the sun during the massacre on the island.

On 22 July 2011, a right-wing extremist detonated a bomb in the government area of Oslo, near the building that houses the offices of the Prime Minister. Two hours later, he opened fire at a youth camp on Utøya Island, organised by the Norwegian Labour Party.

In total, the two attacks killed 77 people (69 in Utøya and eight in Oslo), including friends of then-Prime Minister (and current NATO Secretary General) Jens Stoltenberg and the stepbrother of Crown Princess Mette-Marit.

King Harald and Queen Sonja visited the island at the beginning of the month to also pay homage to the victims and talk with the survivors as the country approaches the eleventh anniversary of the tragedy.