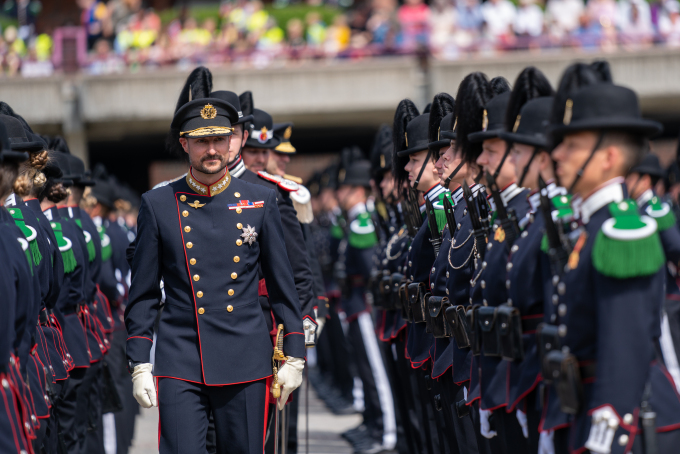 A royal inspection of the Norwegian Royal Guard is an annual event, and Crown Prince Haakon of Norway has inspected the Royal Guard at Huseby Military Camp.

King Harald was not present due to mobility issues; this is not the first time the Crown Prince conducted the inspection alone.

The Royal Guard is present at all the royal residences in Norway and is part of the permanent defence of Oslo each day.

Two of the guards received a special honour during the inspection by His Royal Highness. The Crown Prince awarded “The King’s Clock” to the best guard of the year, who has excellent skills in field discipline, guard and attitude.

After handing out an honorary watch and sword, the guards walked in front of the Crown Prince in a parade before they had had a short musical performance for the future monarch.

A delegation from Her Majesty Queen Margrethe’s Royal Guard also participated in the inspection. It is common for foreign royals to send a delegation, in turn, to the important review and following parade.

Hundreds of soldiers stood up when Crown Prince Haakon arrived at the camp. The inspection of His Majesty The King’s Guard is an open event, and like all other years, there were many school children in attendance.

Traditionally, the inspection takes place in early June of each year.

The changing of the guard in front of the Royal Palace by the Royal Guard takes place daily at 13:00 hours. In the summer, the changing of the guard is also often expanded with music in the form of parades and sometimes a drill show. The Royal Guards have permanent guard service locations at the Royal Palace, Skaugum, Bygdø royal estate (when in use), Akershus Fortress and Huseby military camp.