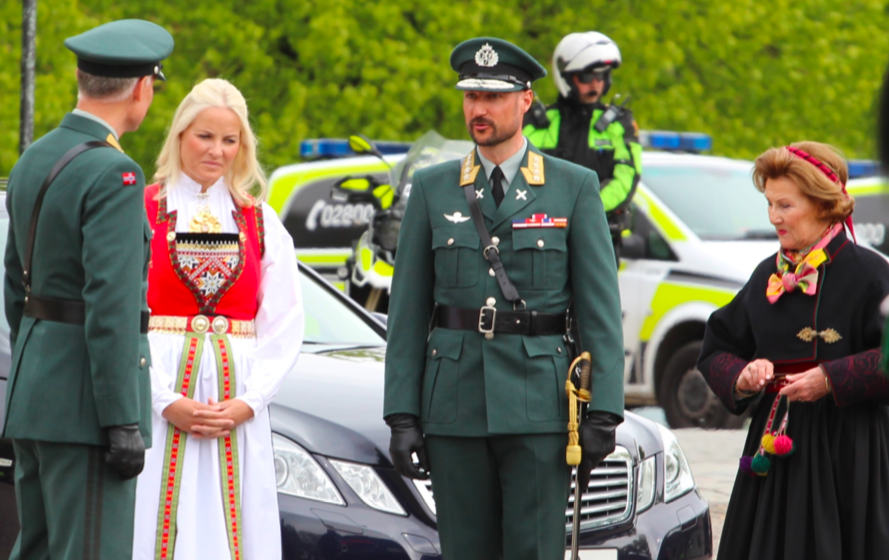 On Saturday, His Royal Highness Crown Prince Haakon laid a wreath to commemorate those who have lost their lives in the service of Norway. Over the weekend, Norway marked their liberation from German occupation after World War II. The Norwegian Royal Family has a long tradition of participating at these events, as they themselves were directly affected during the war and had to live in exile for five years. The wreath-laying ceremony took place at the National Monument at Akershus Fortress in Oslo. His Majesty the King did not attend this year’s ceremony as he is still undergoing treatment after knee surgery earlier this year.

Liberation Day got underway a with a flag ceremony at Akershus castle, inside the fortress. Unlike previous years, Friday’s event was not open to the public. At 10am a short ceremony took place at Retterstedet. It was here where members of the Norwegian resistance were executed by the Germans during World War II. The ceremony consisted of a speech and floral wreath was laid down, decorated in red, white and blue. There were no guests present, but the event was broadcasted online.

Upon the Crown Prince’s arrival, a 21-gun salute was fired from the cannon battery at Akershus Fortress, and fighter jets from the Air Force flew over the fortress. Prime Minister Erna Solberg was present at the ceremony, which had a limited attendance also this year due to the infection control rules in Oslo. Usually this is a ceremony where the whole royal family participates and several thousand spectators come to see.

Every year, the government and the Armed Forces award a bunch of soldiers medals for special efforts in service. The soldiers usually receive their medals during the celebration at Akershus Fortress on 8 May. Due to the pandemic, the medal presentations will take place during a separate ceremony when the infection situation allows it.

On May 8, 1945, Norway was liberated again after five years of Nazi occupation. Since then, Liberation Day has been marked every year. In 2011, the government established the day also as all Veterans Day to honour Norwegian veterans from World War II until today’s international operations. Veterans Day coincided with Liberation Day. Since 1945, more than 100,000 Norwegians have served in more than hundred international operations worldwide.