On Tuesday, His Royal Highness Crown Prince Haakon of Norway attended the funeral of one of Norway’s greatest war heroes from the Second World War, Joachim Rønneberg. The funeral was held in clear, sunny weather in Aalesund in the western part of Norway where Rønneberg came from. Joachim was 99-years-old and died of old age at his local retirement home on 21 October. He leaves behind a nation’s gratitude, several children and grandchildren. His wife died in 2015.

His Royal Highness attended the funeral in his Navy uniform and was greeted on arrival by the priest who performed the funeral. Following a quick introduction to the Rønneberg family, the funeral began in the full church with the song “You Raise Me Up”. 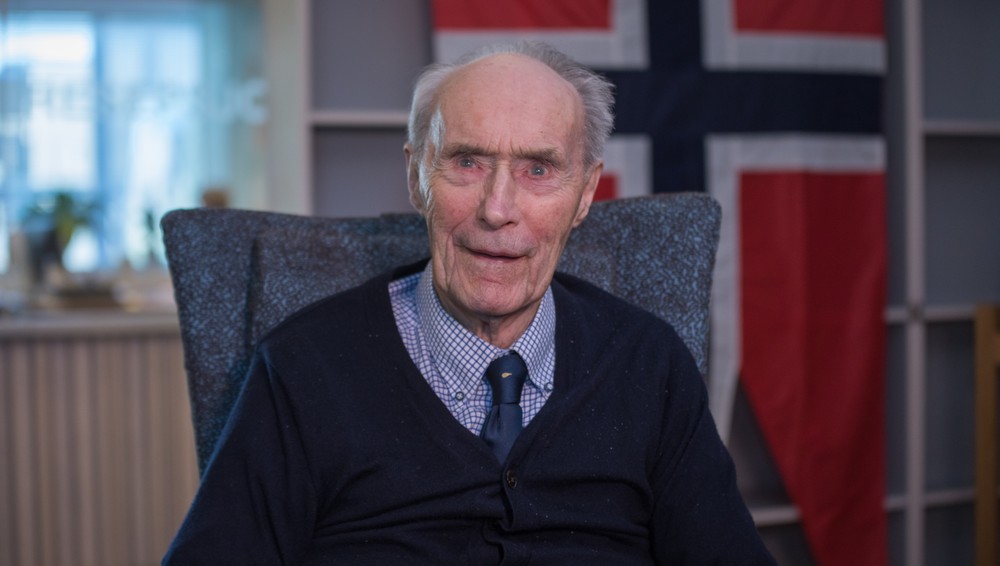 Joachim Rønneberg, photo taken in earlier this year. Photo: Handout by Norwegian TV NRK on the occasion of the announcing of Rønneberg’s death.

Norway’s current Defence Chief, Håkon Bruun-Hanssen said: “He was a patriot, a true officer and a friend of the Norwegian defence”.

Minister of Finance, Siv Jensen also spoke in the funeral. She said: “When we say goodbye to Joachim Rønneberg today, we also take goodbye to a person completely out of the ordinary. Even though he would not be called a hero, it was exactly what he was; a hero who put others in front of himself all his life”. 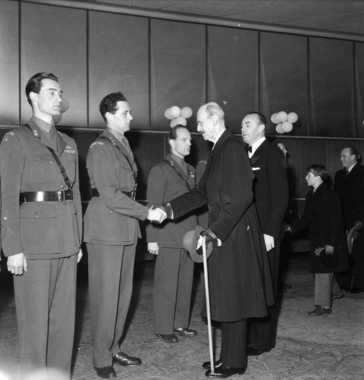 His Majesty King Haakon VII of Norway at the premiere of the movie about Operation Gunnerside. To the left is Joachim Rønneberg. Photo: Digitalmuseet via Wikimedia Commons.

Joachim Rønneberg (99), who was a member of Kompani Linge from 1941 to 1945, is best known for leading the famous heavy water operation at Vemork in February 1943. Operation Gunnerside resulted in Rønneberg and his soldiers placing explosive charges on the massive water electrolysis chambers of the Vemork plant. A Thompson submachine gun was purposely left behind to indicate that this was the work of British forces and not of the local resistance, to try to avoid reprisals.

The raid was considered successful. The entire inventory of heavy water produced during the German occupation, over 500 kg was destroyed along with equipment critical to the operation of the electrolysis chambers. Although 3,000 German soldiers were dispatched to search the area for the commandos, all of them escaped; five of them skied 400 kilometres to Sweden, two proceeded to Oslo where they assisted Milorg, and four remained in the region for further work with the resistance.

Rønneberg received several Norwegian and foreign awards, including the War Cross with Sword and the royal St. Olav Medal. The funeral was held at the expense of the state, as an honorary gift usually given to leading political leaders, politicians and soldiers.