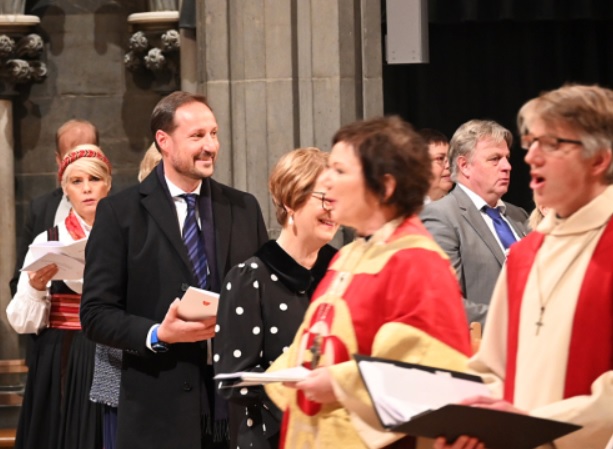 Crown Prince Haakon was present as the Church of Norway marked the appointment of a new president in the Episcopal Conference, a new church meeting and a new church council with a special service in the Nidaros Cathedral

The Norwegian Church’s new president, Bishop Olav Fykse Tveit, was installed during a service in Nidaros Cathedral on 10 May this year. Due to the infection control restrictions, the service was held in limited forms and outside the planned church meeting. Further celebrations was therefore held on October 11th with Crown Prince Hakkon, currently Regent of Norway, present. King Harald and Queen Sonja were meant to attend originally but, following His Majesty’s heart operation just days earlier, both stayed in Oslo.

The President began his sermon with a greeting to the King and Queen: “We had looked forward to the King and Queen being with us today, but for reasons we all know, it was not possible. We send King Harald and Queen Sonja our warm greetings, and hope and pray for continued good recovery for the King.”

Olav Fykse Tveit also said: “Sometimes we are inspired to see the value and infinite value of all people by the way someone meets others or mentions others. We recognize such moments when we have them. For many of us, it has happened when we has listened to His Majesty King Harald. Then we were all embraced as Norwegians, no matter who we are, where we come from, what we believe in or who we love. These are words that have left traces in us as a human being and as a nation. These are words that build on what we have with us in our Christian and humanistic heritage, but which show what they must mean today, in our diverse society now. These words set a new standard in our understanding of our nation’s common values”

Nidaros cathedral choir participated during the service.  After the service, the Crown Prince attended a lunch in the Archbishop’s Palace in Trondheim.