His Royal Highness Crown Prince Haakon arrived yesterday at his last destination on his Pacific tour. The Crown Prince arrived in Samoa where he was officially welcomed on arrival in the capital, Apia. During the welcome ceremony, he inspected an honorary guard from the armed forces.

Following the welcome ceremony, the head of state of Samoa, Tuimalealiifano Vaaletoa Sualauvi II held an official dinner in honour of the visit. Crown Prince Haakon spoke during the dinner and emphasised the importance of Samoa’s leadership. Both climate change and a healthy sea are high on the agenda in both countries.

Crown Prince Haakon said: “Our two countries are literally on opposite sides of our planet. When the sun rises in Samoa, the sun is setting in Norway. We came from the last days of winter in Norway – from the cold north of Europe. Here in the South Pacific, we have been given a warm welcome – amongst friends we have much in common with. We are very grateful for your genuine hospitality.” 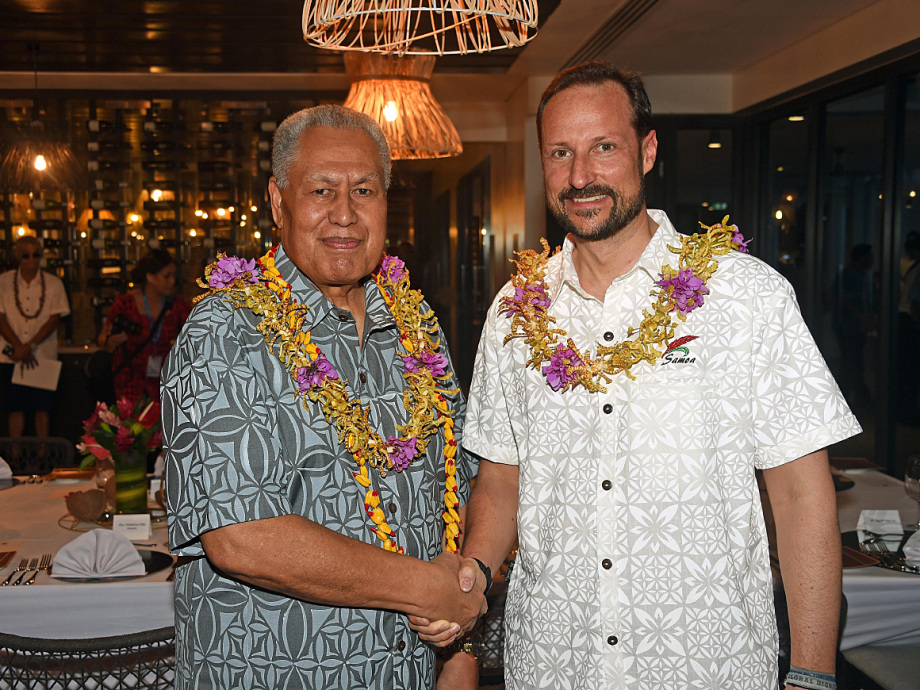 The Crown Prince continued: “We share your view that climate change is a threat to our common security. This fight to strengthen climate action is vital. We are proud to have been working closely with Samoa on the board of the Green Climate Fund for many years. We must ensure that the Fund continues its critical work to enable small states to strengthen their climate resilience”.

The Crown Prince will continue his visit to Samoa today when he will conclude his tour. Crown Prince Haakon will have several meetings with Samoan leaders, and in addition, two field visits are on the agenda around the capital. The Norwegian delegation will see areas that are constantly affected by floods and measures that are being taken to reduce the damage and make the communities more resilient.

Crown Prince Haakon of Norway is currently visiting the nations of Tonga, Fiji and Samoa. The visit will run from 5 April to 11 April. The purpose of the visit is to strengthen partnerships with small island states in the South Pacific for the promotion of common interests including seas and climate, peace and security. Royal Central will follow the visit closely and bring you the latest news from Crown Prince Haakon’s tour.

Tomorrow, the Crown Prince will head back to Norway to spent time with his family during the Easter holidays.