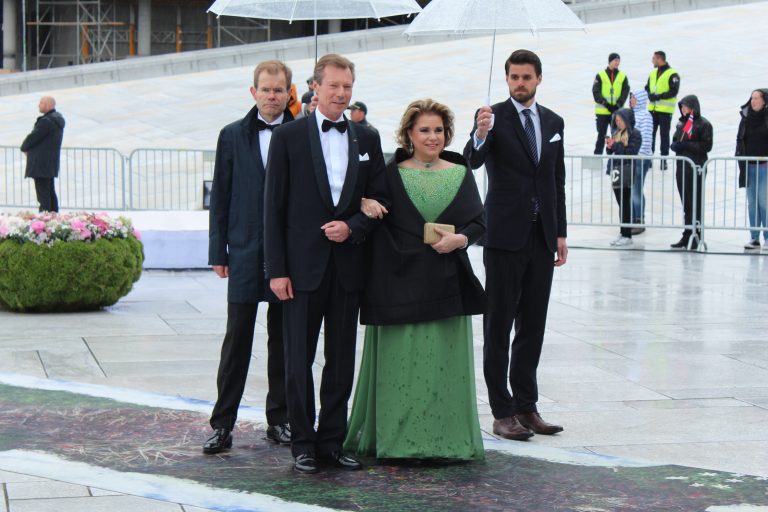 It’s the birthstone of May and about as striking a stone as you can find in any jewellery box. In the fifth month of the year, Royal Central is celebrating all things emerald. And today, we’re looking at the tiaras dominated by that stone which are owned by the Luxembourg Grand Ducal Family.

The Chuamet Emerald Tiara is an Art Deco-style tiara made with intricate diamond-scroll designs and featuring a large central emerald. Created in 1926 by Chaumet using pieces already found in the Grand Ducal Family’s collection, the large cabochon emerald is framed by diamonds and set in platinum. It was first worn by Grand Duchess Charlotte, who received it as a Christmas present from her husband, Prince Felix of Bourbon-Parma.

Some of the pieces Prince Felix sent to Chaumet in Paris to create this tiara reportedly included a pair of earrings, a necklace, and a brooch. The Chaumet Emerald Tiara became one of Grand Duchess Charlotte’s favourites, and she wore it frequently throughout her reign. After her abdication, the new Grand Duchess Joséphine-Charlotte wore it less frequently. Eventually, the tiara passed to Grand Duchess Maria Teresa, who wore it regularly at the beginning of her husband’s reign, but hasn’t worn it much in the later years.

Princess Joséphine-Charlotte received this eponymous Emerald Peacock Tiara from Van Cleef & Arpels in 1956, having commissioned an emerald piece that could be used as both a tiara and a necklace.

Princess Joséphine-Charlotte received the emeralds used to create the tiara from her late mother, Queen Astrid of Belgium. It received its name from the design work of the central emerald piece, which looked like peacock feathers.

Princess Joséphine-Charlotte wore the Emerald Peacock Tiara regularly and, during her lifetime, only ever lent it out to be worn by her own daughters. It wasn’t until 2010, ten years into her husband’s reign that Grand Duchess Maria-Teresa was seen wearing the tiara.

Grand Duchess Maria-Teresa inherited this tiara from her mother-in-law upon her death and has also lent it out to family members, including Tessy Antony and Archduchess Marie Astrid of Austria.

The Luxembourg Grand Ducal Family also has access to other emerald jewellery that once belonged to Queen Astrid of Belgium. Her daughter, Grand Duchess Joséphine-Charlotte was rumoured to have inherited her late mother’s emeralds, and brought them to Luxembourg.

Grand Duchess Maria-Teresa was pictured wearing an emerald necklace belonging to Queen Astrid at Queen Margrethe’s 70th birthday concert in 2010, and again in 2018 on a state visit to Paris.