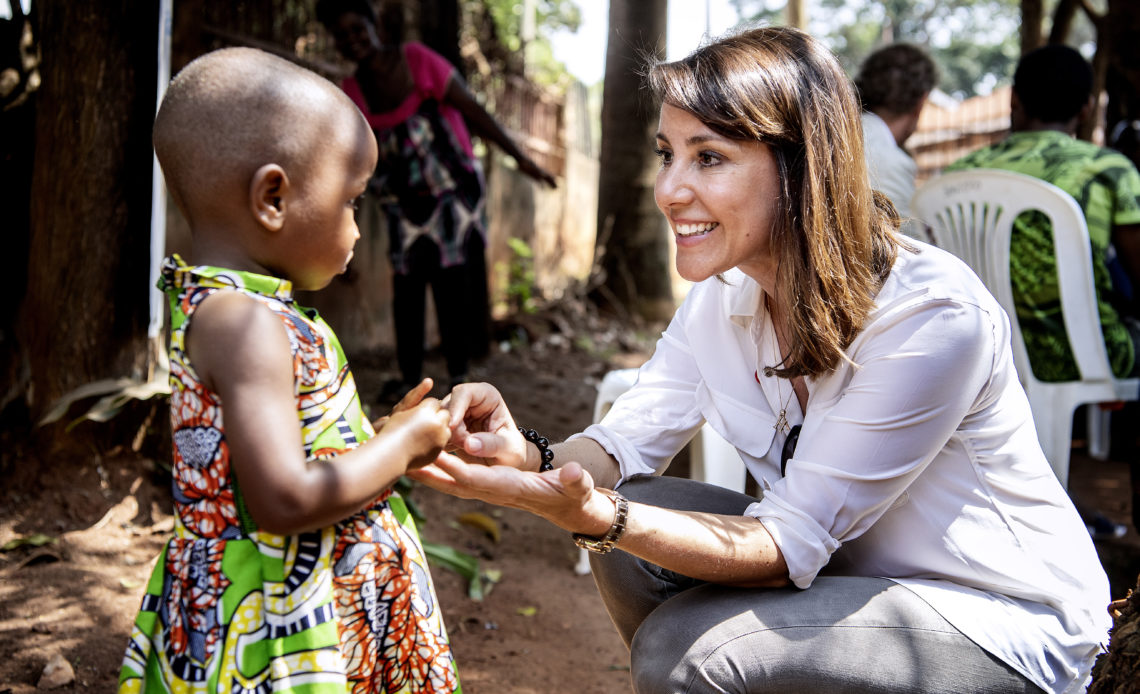 On 26 February, Princess Marie started a five-day humanitarian trip to Uganda as Patron of DanChurchAid.

For her first official event in the country, Princess Marie visited the Raising Gabdho Foundation in Kampala. During her visit, Princess Marie learned more about the foundation’s work and the techniques they developed to cook in a more sustainable way.

On 27 February, Princess Marie travelled to the Arua district with the DanChurchAid team. Upon her arrival, Princess Marie and the members of the media were all checked for a fever and tested for the Ebola virus.

Afterwards, Princess Marie visited the DanChurchAid project “Fresh Fruit Nexus”. The project was developed by the Danish International Development Agency in Northern Uganda in 2018 and is administered by DanChurchAid. Princess Marie first met local Ugandan farmers in the Omugo Refugee Settlement who, together with refugee families, have started a cooperative where they can collect their crops together and have the opportunity to borrow money from each other.

Then, Princess Marie met with four women from South Sudan who have fled with their families into Uganda. DanChurchAid said: “It was clear that the Princess felt comfortable in the women’s company as they walked around the field showing off several of the crops – including ginger, turmeric, and sweet potatoes.”

One of these women told Princess Marie that the project had saved her son’s life as it gave her the opportunity to borrow the money she needed to pay the necessary medication against malaria needed to save her son.

On 28 February, Princess Marie travelled to Katakwi where she was warmly welcomed by villagers and joined them for a dance. Afterwards, she visited a health centre that aims to help the villagers and teach them how to safeguard basic rights and how to reduce corruption. Princess Marie also met with farmers to discuss sustainable development with them and how they can be even more included in this process despite their limited means. During the visit, Princess Marie met with Janet, a 28-year-old woman who learned how to grow different crops so that she can sell the plants. With this ability, Janet can now provide for her husband and her four children and they can eat more than once a day.

Princess Marie was very impressed and said that Janet’s story was “very inspiring because she is a woman and because you could really feel her motivation and commitment. Of course, her husband was there, but it was her who did it all, so I was very impressed with her”.

Princess Marie’s trip to Uganda ends on 1 March and will see her meet with young climate activists, attend a reception hosted by the Danish Ambassador in Uganda and meet with the Uganda Women Network before flying back to Paris.