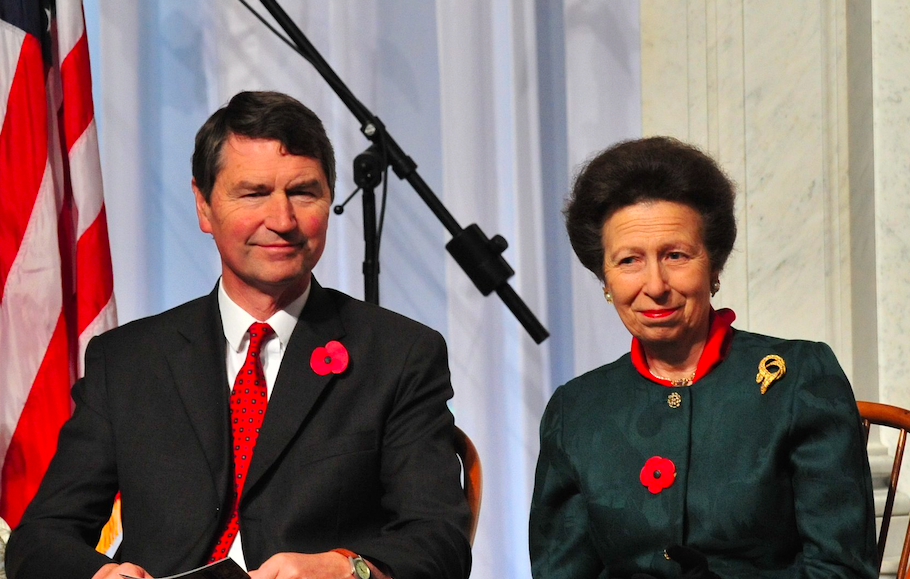 One of the lesser known members of The Royal Family is the Princess Royal’s husband, Vice-Admiral Sir Timothy Laurence.  Generally referred to as Tim, he is the second husband of Princess Anne, having been married for 27 years. He is very often overlooked, but is an interesting royal nevertheless. This post offers a glimpse at who Sir Tim really is.

In March 1955, Timothy Laurence was born in South London to Commander Guy Laurence, a salesman of marine engines, and his wife Barbara. Young Tim studied at the New Beacon Preparatory School and then at Sevenoaks School in Kent, before receiving a Naval Scholarship to the University of Durham. From there he graduated with a degree in Geography, following which he enrolled in the Royal Navy as a midshipman.

He was quickly promoted to Sub-Lieutenant, then Lieutenant and finally Lieutenant Commander. He served upon various battleships and minesweepers, most notably HMS Boxer, HMS Cumberland and HMS Montrose. He was initially on the Naval Staff of the Ministry of Defence before being promoted to a member of the Implementation Team for the Strategic Defence Review. In 1986, he was appointed as Equerry to Queen Elizabeth, a post he would occupy for three years.

Equerries to the Queen are most commonly high-ranking military officers who attend to her during public appearances and royal events. In this role, Laurence soon became a favourite among the royal family. He stood behind Her Majesty as she received the President of the Soviet Union, Mikhail Gorbachev, and served as an aide and comfort to many other members of the royal family.  On one occasion he even escorted Princess Diana to lunch, while Prince Charles played polo.

It was during the time he served as an Equerry that he met his future wife, Princess Anne. Their first encounter was aboard the Royal Yacht Britannia, on which he was a Navigation Officer, while the Princess was on a tour of duty. Soon afterwards, he was chosen as a personal adviser to Princess Anne’s Charities Trust, affirming her affection for him. Their relationship became public in 1989, when letters written to the Princess Royal by the then Commander Laurence were stolen and published in the newspapers. This shocked the royal household, and there was talk of his committing high treason by being romantically involved with the Monarch’s daughter while she was still married to another man. However, the Queen had grown fond of her Equerry, and chose not to take the “treason” seriously, deciding that the relationship could not be all that bad if her daughter found happiness in it.

At the time, comparisons were made between Tim Laurence and Peter Townsend, the Equerry of King George VI who was in a relationship with Princess Margaret around 1953. They too met while Townsend was in His Majesty’s service, and their relationship was opposed because Townsend was divorced from his first wife. The relationship eventually ended, but, as it turned out, Timothy and Anne were about to get a much happier ending.

A few months after her divorce from her first husband Captain Mark Phillips was finalised, Princess Anne and Commander Laurence were married in a Church of Scotland ceremony at the Crathie Parish Church near Balmoral. The two chose to get married in Scotland because the Church of Scotland permits the marriage of divorced people whose former spouses are still alive.

The royal couple leased a flat in Dolphin Square, London, but have since given it up and taken up residence in an apartment at St. James’ Palace and at Gatcombe Park alternately. At the time of his marriage, Timothy, like Princess Anne’s previous husband Captain Phillips, did not receive any peerage, but was made a Knight Commander of the Royal Victorian Order by the Queen in 2011.

In 2010, Timothy Laurence retired from the Navy, and chose to focus instead on non-executive, charitable interests. His role as a member of the royal family is mainly a supportive one, and he does not make many public appearances. He occasionally accompanies Princess Anne when she embarks on her official duties, and can been seen on the balcony at royal events such as Trooping of the Colour and Remembrance Day.

Sir Timothy has no children of his own, but is very close to his step-children, Peter and Zara Phillips. He was the captain of the cricket team at his college, and enjoys tennis and golf. Being a military man, he has an interest in activities such as battlefield tours. He shares his wife’s love of sailing and yachting, and together they have a yacht, Ballochbuie.