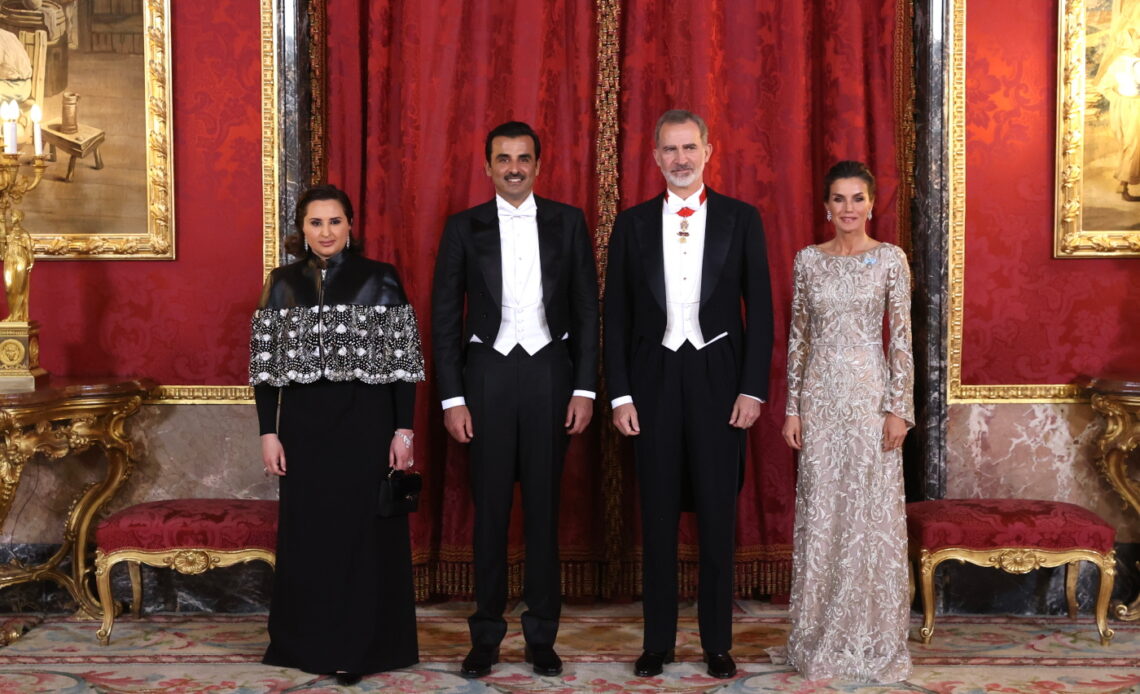 The official state visit began on Tuesday, 17 May, but the Sheikh arrived in Madrid the day before, and King Felipe travelled to the Royal Palace, where the Emir and his wife will be quartered for the duration of their visit, to hold an initial meeting with Qatar’s head of state.

The morning of Tuesday marked the official beginning of the state visit, with the welcoming ceremony taking place in the court of El Pardo Palace, during which King Felipe and Sheikh Tamim Bin Hamad Al Thani reviewed the honour battalion of the Royal Guard.

After that, the two heads of state returned to the tribune, where they received the salute of the two delegations and listened to the national anthems before re-entering the Palace and holding a short meeting in the Genoa Hall.

It was then time for the two heads of state to reunite with their consorts at La Zarzuela Palace, where the King and Queen offered the Sheikh and Sheikha a lunch, but not before posing for the traditional official photograph on the steps in front of the main entrance of La Zarzuela.

The Sheikh’s afternoon was devoted to meetings with other political authorities, including the presidents of the two branches of Parliament and the Prime Minister, before the Qatari couple returned to the Royal Palace for the traditional state dinner.

Despite this being a proper state visit, Queen Letizia was not wearing a tiara, a tradition of the Middle Eastern monarchies, and also a way of remembering the late UAE Emir Sheikh Khalifa bin Zayed bin Sultan Al Nahyan, who died on 13 May.

However, during his dinner speech, King Felipe made up for the lower level of pomp with a heartfelt note, as he translated the welcome portion of his words into Arabic, impressing all the presents with his skills, as his eldest daughter Princess Leonor did during her first Princess of Girona Awards speech.

To finalise the evening, the two heads of state held a meeting with all participants in the Gasparini Hall of the Palace.

The visit will end on Wednesday, 18 May, after which the Sheikh and Sheikh will presumably make their way back to Qatar, while King Felipe will have to deal with the consequences of King Juan Carlos’ rumoured return to Spain.