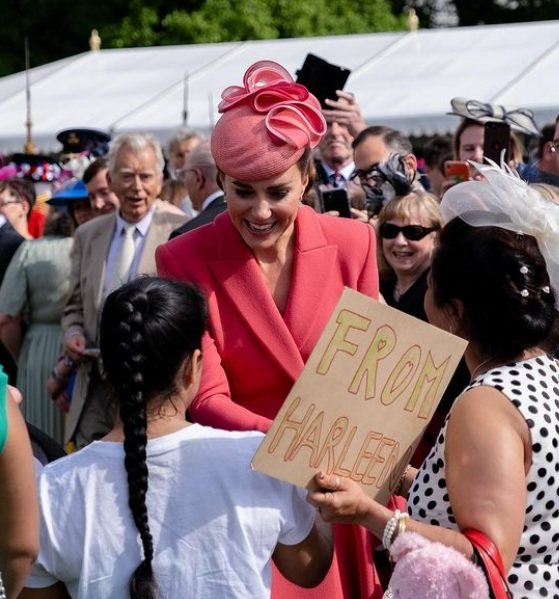 Thousands of guests were welcomed to Buckingham Palace by a quartet of royals who hosted the latest summer garden party there on behalf of The Queen.

The Earl and Countess of Wessex, the Duchess of Cambridge and Princess Alexandra all attended the second garden party of the season which took place on May 18th 2022.

The event took place in sparkling sunshine as London enjoyed one of the hottest days of the year so far.

The royals stepped out in the early afternoon and, after standing for the national anthem, headed off to meet some of the guests.

This garden party, like the others taking place at the Palace and at Holyroodhouse in Edinburgh, celebrate people from across the community in the UK. Invitations are issued to those recommended by a range of ”sponsors” including Lord Lieutenants, government departments, churches and faith groups.

Three such garden parties take place every year in London while others, for particular organisations, are also held in the Palace grounds. There is one garden party in Holyroodhouse every summer.

The Queen traditionally hosts the parties but this year, Buckingham Palace announced that she would miss them and other royals would welcome guests on her behalf.

Both the Duchess of Cambridge and Princess Alexandra chose pink for the occasion while the Countess of Wessex was in a white dress with a lilac floral print.

This was the second of the trio of parties to take place this year. It’s the first time Buckingham Palace has hosted garden parties since 2019, with both 2020 and 2021’s events being cancelled because of the pandemic.