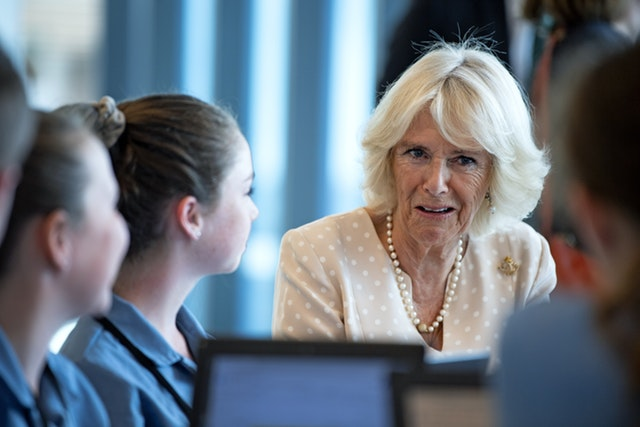 While in Christchurch, New Zealand’s Tūranga Library, the Duchess of Cornwall announced the Moomin characters as a principal sponsor of The Queen’s Commonwealth Essay Competition 2020. Her Royal Highness made the announcement among young school children who had participated in a writing workshop alongside New Zealand Poet Laureate, David Eggleton.

Camilla said in her announcement, “As the proud Vice-Patron of the Royal Commonwealth Society, I am particularly delighted to launch The Queen’s Commonwealth Essay for 2020 in this lovely city of Christchurch.”

The Duchess also presented some of the children with certificates from the 2019 Queen’s Commonwealth Essay Competition.

Next year’s theme is ‘Climate Action in the Commonwealth,’ and it aims to encourage young writers from around the world to “explore the many facets of this critical issue, which will dramatically shape the future of the Commonwealth’s 1.6 billion citizens under the age of 30,” according to Riot Communications in a press release.

The Moomin characters were created by Finnish artist and writer Tove Jansson in the 1940s. Jansson wrote and illustrated nine Moomin books in total among other picture books and a comic strip.

The Moomin characters welcome the 2020 theme as they support causes “with the values of friendship, tolerance, open-mindedness, respect for nature and the power of storytelling.”

The creative director of Moomin Characters and niece of Tove Jansson, Sophia Jansson, has said, “The power of reading and writing and the importance of working together to protect our planet are both very important to us, and they come together in such a beautiful way in The Queen’s Commonwealth Essay Competition 2020. Each year, the themes of the Competition are around community and collaboration. We’re very proud that in the first year of our sponsorship this is applied to the environment. The passion and intelligence of young people will be crucial in tackling the climate crisis, so we are very excited to see what entrants have to say in response to the topics that have been set for 2020.”