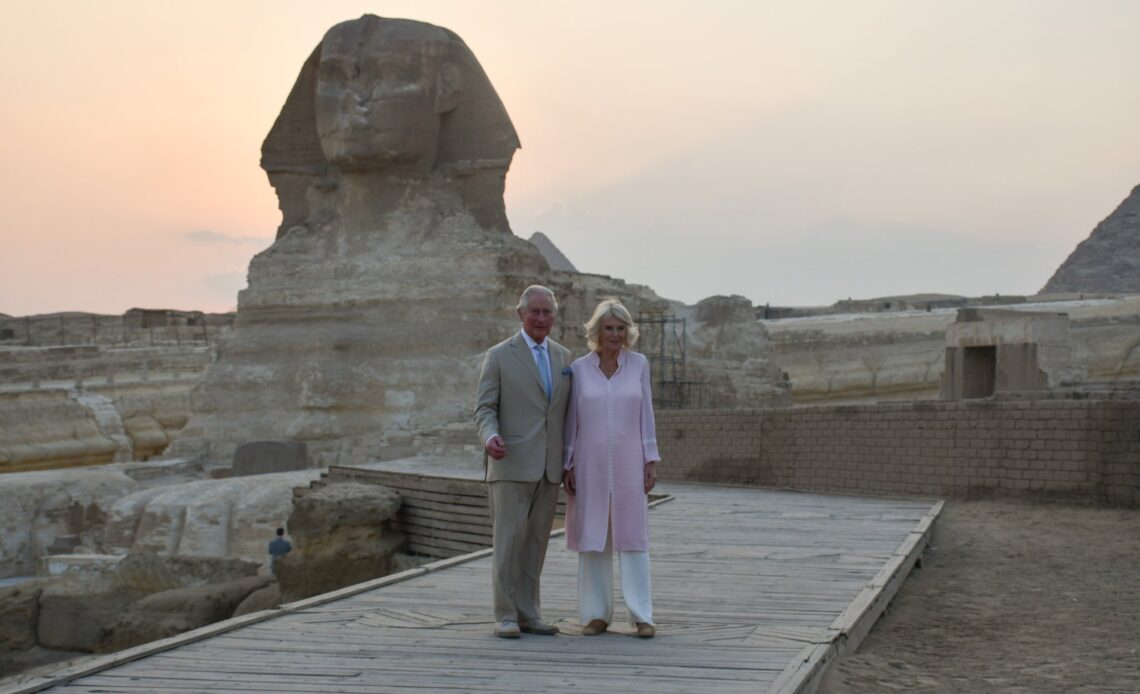 The Prince of Wales and the Duchess of Cornwall have begun their royal visit to Egypt with an iconic image in front of one of the country’s most famous sights. The couple posed for photos in front of the Sphinx as their tour unfolded.

It had begun on the morning of November 18th 2021 as the royals arrived at Cairo Airport and were greeted by Gareth Bayley, the UK Ambassador to Egypt.

Afterwards, they travelled to the Al-Ittahadiya Palace, where they met with President Sisi and First Lady Entissar Amer for formal photos and bilateral meeting talks.

Their next stop was to the Al Azhar Mosque, located in Old Cairo, to meet with the Grand Imam Ahmed el Tayyeb. Prince Charles stayed to attend an interfaith reception with the Grand Imam and the Archbishop of the Anglican Province of Alexandria. Those attending discussed religion and climate change alongside Al-Azhar scholars.

Meanwhile, Camilla paid a visit to the Ezbet Khairallah neighbourhood to meet with women supported by Button Up. She also viewed some ecofriendly projects, discussed planting programmes with community leaders, and potted a plant before watching a performance by women storytellers.

Prince Charles then paid a visit to the Beit al-Razzaz craftsman workshop to see the work of the Egypt Heritage Rescue Foundation and works by students of The Prince’s Foundation School of Traditional Arts.

An instantly iconic photo of Prince Charles and Camilla was taken on their next stop, an official visit to the Great Pyramids of Giza and the Great Sphinx of Giza.

Clarence House tweeted: “A phenomenal moment at one of Egypt’s great sites of rich ancient history.”

Prince Charles and Camilla wrapped up their first evening in Egypt with a reception at the 9 Pyramids Lounge—a restaurant that overlooks the Giza Pyramids—where they met with Egyptian government officials, military personnel, stars of film and other media, business leaders, and those with links to the British Embassy.

In a speech, Prince Charles said: “It is the greatest pleasure for my wife and myself to be with you this evening, and indeed to be in Egypt again after – I can hardly believe it – more than fifteen years.  We both have fond memories of Egypt, and the recollection of our last visit has drawn us back.”

He continued, speaking of Egypt’s role in tackling climate change crises: “I know that Egypt is on the front line of urgent climate change challenges, from rising sea levels to loss of biodiversity in Egypt’s seas as temperatures rise.

“I can only applaud your leadership – for example phasing out coal and creating at Benban Africa’s largest solar park, with a staggering annual production capacity of 3.8 terawatt hours and, crucially, recognising the need to do more to combat the crisis.

“As President Sisi steps forward to take on the Presidency of COP27 later this year, the United Kingdom will be with Egypt as your friend and partner in this epic struggle to protect and restore our environment, and to build a better future for us all.”

Prince Charles and Camilla conclude their royal visit to Egypt on November 19th 2021.