The unveiling of the Cenotaph: The day George V led a nation still recovering from war 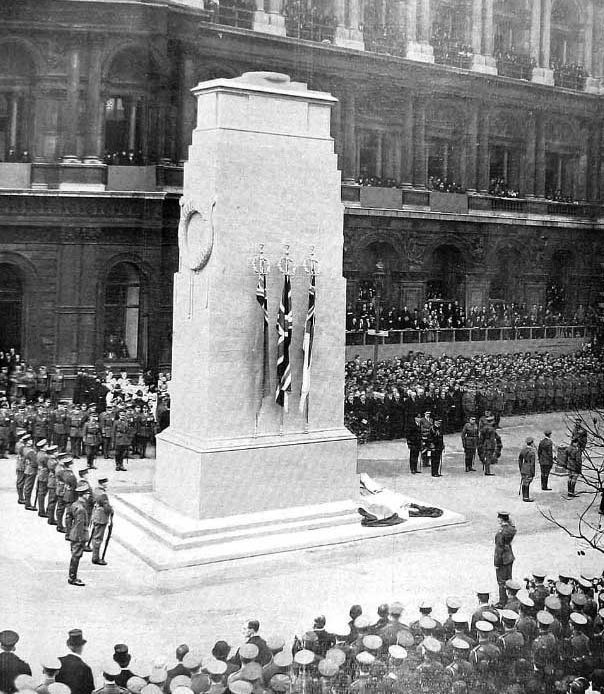 On 11 November 1920, King George V led Britain in two minutes of silence to remember those lost in the First World War and to mark the exact moment when Armistices brought the Great War to a close. The king also unveiled the Cenotaph in Whitehall.

In 1919, the government planned Peace Day for 19 July- a day to mark the signing of the Treaty of Versailles and to celebrate the work of British and Commonwealth troops. A temporary Cenotaph built out of wood and plaster was erected for the day.

While the public had celebrated their troops, the overwhelming support was not for the parade or the celebrations, but rather the Cenotaph. Over half a million families and friends had visited and left flowers and tokens for their loved ones at the Cenotaph in the first two weeks after Peace Day. By the beginning of 1920, it had to be taken down as it was not meant to withstand for a long period.

Due to the amount of public support, the government moved forward with a permanent Cenotaph in the same design as the temporary one. The firm Holland, Hannen, & Cubitts built the permanent version in Portland Stone.

King George V unveiled the statue in Whitehall on Remembrance Day in 1920. The government had decided to repatriate the remains of an unknown soldier from France. The King laid a wreath on the coffin of the unknown soldier and then proceeded on to unveil the new, permanent Cenotaph and lead the moment of remembrance.

George then continued to Westminster Abbey to attend the funeral of the man who was buried in the Tomb of the Unknown Soldier at the Abbey. The Tomb went on to take an important role in royal weddings after the future Queen Mother laid her bridal bouquet on the gravestone at her marriage, starting a tradition followed by many royal brides afterwards.

Although the Cenotaph was originally meant to mark those who served and lost their lives in the First World War, it was also chosen to mark those from the Second World War. On 10 November 1946, King George VI unveiled the monument again. It now commemorates British servicemen and servicewomen who have given their lives in any combat and war.

King George V, King George VI, and Queen Elizabeth II have annually led the Remembrance Day ceremony at the Cenotaph (aside from pregnancy and/or absence on state visits). Beginning in 2017, Prince Charles has laid the main wreath at the ceremony in place of his mother who watches from a balcony overseeing the Cenotaph.