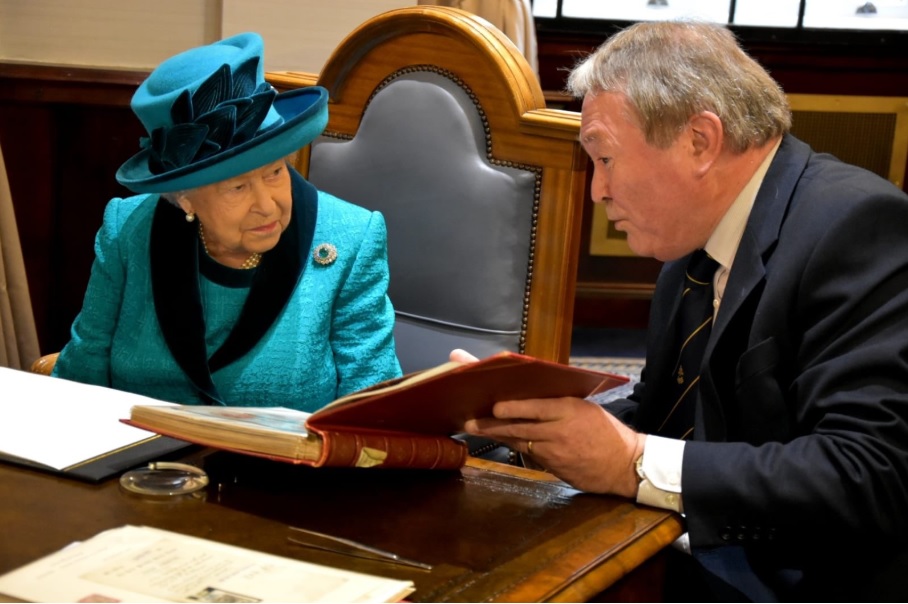 The Queen opened the new headquarters of the Royal Philatelic Society in its 150th anniversary year on Tuesday, and viewed a stamp portrait of herself while joking around with the staff and guests.

After entering a room at the new headquarters in London, The Queen joked “You’re all terribly silent, aren’t you?” when the gathered crowd was awed at her presence. Of the new facilities, which had been under construction for two years, she said “That must have been quite a business, I should think, wasn’t it? Quite stressful. I hope you are enjoying the place.”

During her visit, she toured the facilities and was shown correspondence between her grandfather, King George V and experts at the Royal Philatelic Society.

She also viewed a portrait of herself and four other British monarchs – Queen Victoria, Edward VII, George V, and George VI. Her own portrait was from her coronation stamp in 1953, and when she saw it, The Queen remarked, “Oh yes, I remember that one.”

When shown the portrait of George V, she said that he was always so interested in stamps.

The Royal Philatelic Society’s curator, Alan Huggins, told reporters afterwards that The Queen “remembered [George V] as a great collector. Her own collection was very much created by her grandfather but she has added to it over the years.”

The Queen signed a special 150th anniversary commemorative book before leaving, and upon being told that she was also being given a copy as a gift, she asked if it was the same book.

“Apart from that it’s not signed,” she was told as she signed. The Queen joked: “Oh well, never mind.”

The Royal Philatelic Society was founded in 1869 and has enjoyed a long royal connection. The Society was granted royal status in 1906 and has boasted several philatelist monarchs as collectors of an expansive stamp collection that has grown since Edward VII started collecting.

King George V, back when he was still The Duke of York, became honorary vice-president of the Royal Philatelic Society and his tenure ran from 1893 to 1910. He became its royal patron upon his accession to the throne.

King George VI continued to grow the royal stamp collection, as has Queen Elizabeth, though it has never been confirmed that she is a philatelist as well.