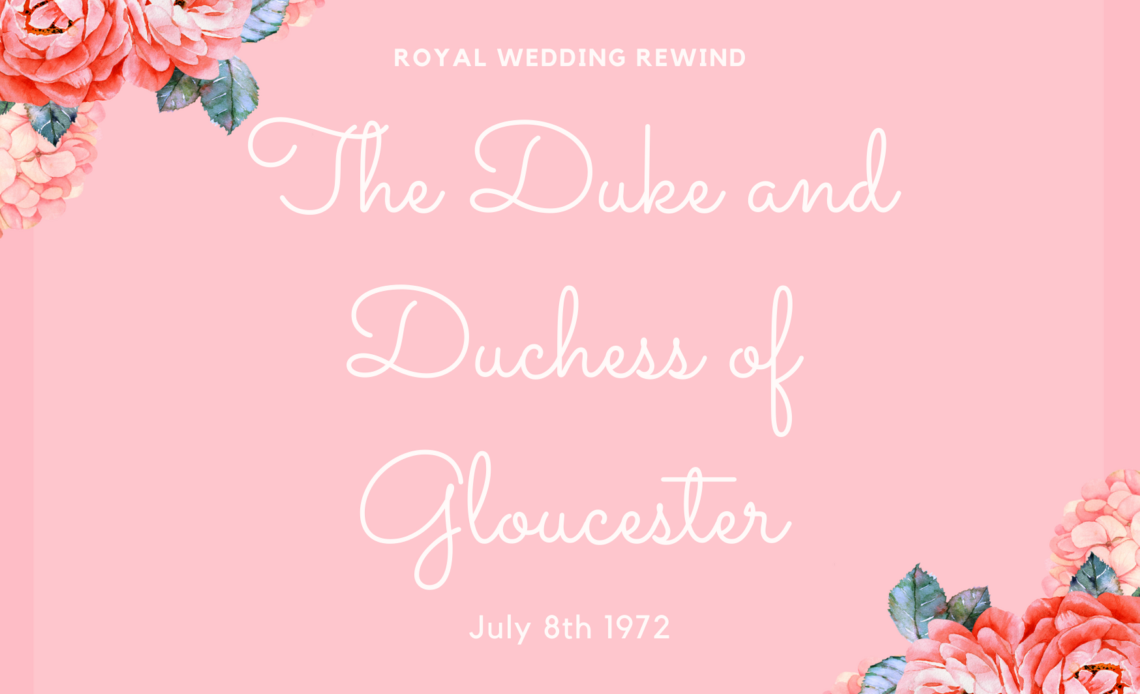 It was a quiet country affair, far removed from the pomp and ceremony we’ve come to expect from royal weddings. The setting was an English parish church, the regal guest list only filled a couple of pews, and the bride walked in several minutes late carrying her own train to protect it from the rain. The marriage of the Duke and Duchess of Gloucester, on 8 July 1972, was a royal wedding with a difference.

There was a good reason for that. When Prince Richard and Birgitte Van Deurs married, they had no expectation of anything other than a life on the fringes of the Royal Family. The groom was the second son of Henry and Alice, Duke and Duchess of Gloucester and a cousin of The Queen, but a fairly low ranking one in terms of regal duties. The future of the House of Gloucester and the burden of royal responsibility lay with his elder brother, Prince William, who was best man at the wedding.

Instead, Richard and Birgitte were looking forward to a quiet, if well to do, life in the country. He was an architect; she had been working at the Danish Embassy in London. They had met in the 1960s at Cambridge where Richard was studying at Magdalene College, and Birgitte was at the Bell School of Languages. They announced their engagement in February 1972 with the Prince presenting his fiancée with a coral ring he had designed himself.

The couple decided to marry at the 13th century St Andrew’s Parish Church, Northamptonshire, just a short walk from the Gloucester family estate at Barnwell Manor. On the morning of their marriage their guests, including the Queen Mother, the Prince of Wales and Princess Margaret, arrived there in the rain to find large crowds waiting to watch this wedding unfold. There was also a substantial media presence although as this was a private wedding, no one was allowed to record the marriage ceremony itself.

The bride arrived a few minutes late with the rain still pouring down. She wore a dress by Norman Hartnell who had first come to royal attention almost forty years earlier when he designed the gown worn by Prince Richard’s mother, Alice, for her marriage. Since then, he had become the Windsor couturier of choice, but his latest creation was among his most modern. Hartnell chose a 1970s style dress with high collar, long sleeves and full length fitted skirt. The gown, made of Swiss organdie, also had a small train. Birgitte’s veil was made of tulle and was held in place with stephanotis flowers rather than a tiara.

Birgitte had no bridesmaids or pageboys and instead managed her own gown, lifting the train away from the puddles as she walked into her wedding. On the way out of the church, her new mother in law stepped forward to arrange her skirt and veil and make sure the bride looked picture perfect for the waiting press. The couple and their guests posed briefly in the rain before returning to Barnwell Manor for the reception where they were joined by the groom’s father. Henry, Duke of Gloucester hadn’t been able to go to the church service – the 72-year-old had already suffered a series of strokes and was in poor health.

While Richard and Birgitte had been the stars of the day, the press had been just as interested in the groom’s brother, the handsome and charismatic William. As the Duke of Gloucester was so poorly, William had taken on an increasing amount of royal duties in the years before his brother’s wedding and was fast becoming a regal darling of the press. However, just weeks after the wedding, he was killed in a plane crash. His death, on August 28th 1972, devastated his close-knit family and turned Richard into the heir to the Dukedom of Gloucester. Soon afterwards, he and Birgitte began to take on more royal responsibilities. On June 10th 1974, with the death of Henry, they became Duke and Duchess of Gloucester and senior members of the House of Windsor.

No one could have imagined the sad turn of events just around the corner when the couple and their guests strolled into that ancient parish church in the rain. Yet the marriage that took place there on July 8th 1972 ended up being a very royal wedding indeed.

The wedding of the Duke and Duchess of Gloucester is one of dozens featured in our new book, all about regal marriages. It’s available as an ebook and a paperback from Amazon.