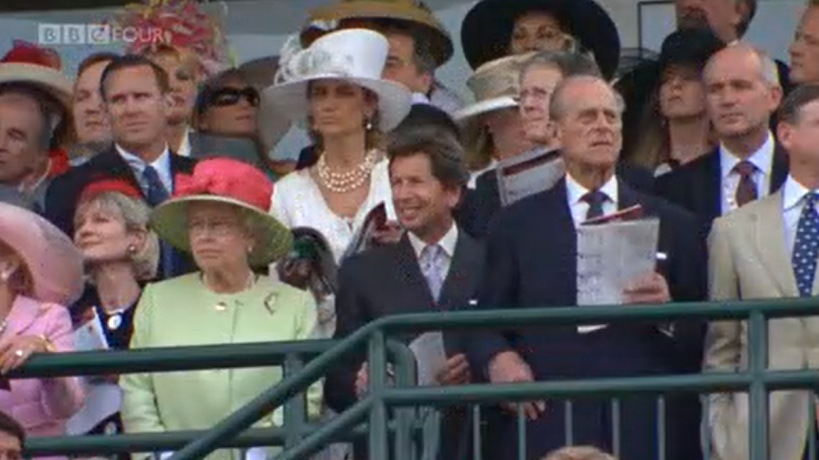 The Queen is a huge supporter of horse racing and is one of the sport’s most prominent owners, so it is hardly a surprise that in her free time the monarch will be spotted on a racecourse.

Her Majesty has become a regular face at some the UK’s best known racetracks such as Ascot and Epsom Downs, but The Queen has also been known to visit racecourses around the world, including Churchill Downs in Kentucky.

The South Louisville racing complex is best known for hosting America’s most famous horse race – the Kentucky Derby which takes place each year on the first Saturday of May.

The monarch’s visit to Churchill Downs came as part of a week long state visit to the USA on the invitation of President Bush.

On their visit, the Queen and Prince Philip visited Washington DC, Virginia, Maryland and Kentucky.

Their couple’s visit to Kentucky was mostly private, with their only public appearance being at Churchill Downs with racegoers keen to get a glimpse of the monarch who was wearing a lime green wool coat with a matching dress and hat.

The Queen and Prince Philip arrived around two hours ahead of the race and were given a round of applause by spectators as they entered a private suite by the finishing post.

It was widely reported in the press at the time that attending the Kentucky Derby was one of The Queen’s dreams as it is one of the most prestigious international racing events on the calendar.

Her Majesty and Prince Philip are not the only royals to have attended the Kentucky Derby. Princess Margaret was known to be a visitor to the race meeting.

14 years later in 2021, royalty is trying to win the $3 million race in the colours of Dubai’s ruler Sheikh Mohammed bin Rashid Al Maktoum.

Sheikh Mohammed, similar to The Queen, is one of racing’s most prominent figures, having won most major races including the Epsom Derby and the Ascot Gold Cup.

However, the Kentucky Derby has somehow managed to elude His Highness and his Godolphin stables.

This year, fortunes could change, with Sheikh Mohammed owning short favourite for the Derby, Essential Quality.

If Essential Quality does pass the finishing line first, then major controversy can be expected.

There have been calls to ban Sheikh Mohammed from the race  until he can provide proof his daughter Sheikha Latifa is alive.

In this fact-finding judgment, it was held that Latifa attempted to escape the UAE in 2018 and made a dramatic video exposing her father’s nature.

The United Nations intervened and asked to see proof of life back in February, however, no evidence has bee forthcoming.

The Queen and Sheikh Mohammed have enjoyed a close friendship for many decades to their shared love of horses.

It is understood that the two Heads of State will no longer appear in public together following the High Court judgment, with The Queen distancing herself from Dubai’s ruler.