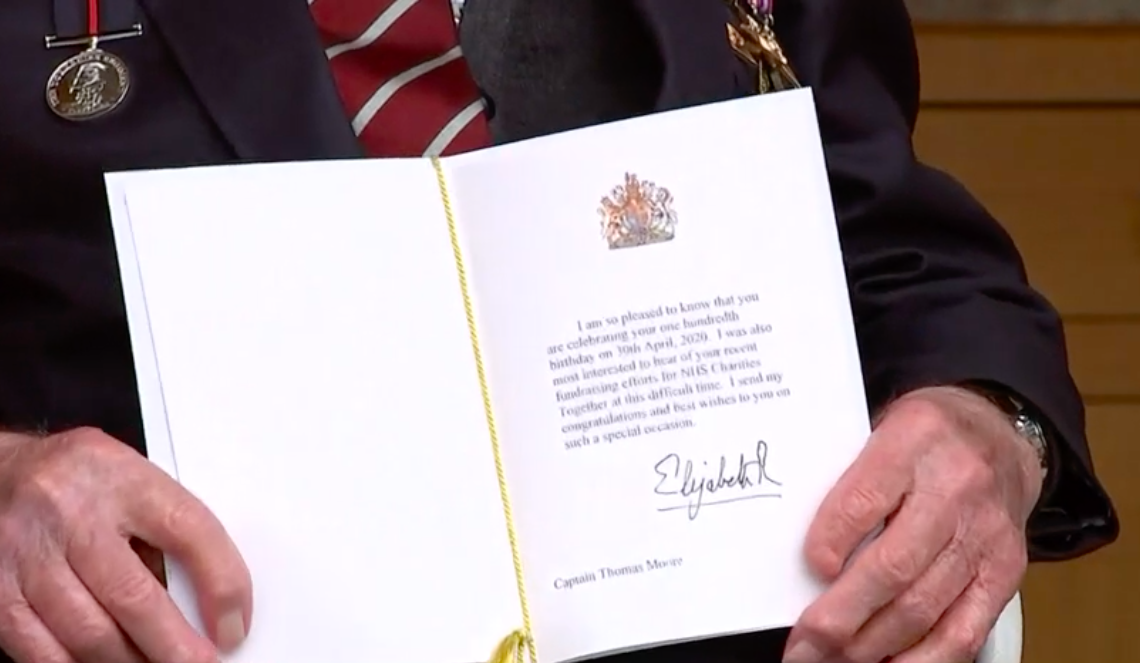 The Queen has sent her personal congratulations to Colonel Tom Moore on the occasion of his 100th birthday.

On Thursday morning, Her Majesty’s personal representative, the Lord-Lieutenant of Bedfordshire, delivered a 100th birthday card to the former British Army officer.

In the card, Her Majesty wrote: “I am so pleased to know that you are celebrating your one hundredth birthday on 30th April 2020.

“I was also most interested to hear of your recent fundraising efforts for NHS Charities Together at this difficult time.

“I send my congratulations and best wishes to you on this special occasion.”

As well as the birthday card, The Queen promoted Captain Moore to an Honorary Colonel to celebrate his centenary.

The man who has captured imaginations around the world has been made the first Honorary Colonel of the Army Foundation College as he turns 100. The college is based in Harrogate in Yorkshire, the county of his birth.

However, he’s not planning on changing his name. He told BBC Breakfast that ”I think, well, I’m still Captain Tom…but if people choose to call me Colonel, well thank you very much!”

The new colonel sprang to fame when he decided to walk 100 laps of his garden before his 100th birthday to raise £1,000 for the NHS. His efforts won fans around the world and so far, he has brought in over £30 million for his campaign. His efforts have been boosted by a charity version of ‘We’ll Meet Again’ which he recorded with singer, Michael Ball. It topped the charts meaning that Tom Moore is the first centenarian ever to have a Number One in the UK.

Celebrations for his 100th birthday included a flypast by two Spitfires which circled above his home in Bedfordshire. Another flypast, including an Apache Attack Helicopter, will take place this afternoon.

The Prime Minister, Boris Johnson, also spent a special message praising Captain Tom. The lifelong cricket fan has also been made an honorary member of the England team.

Thomas Moore was born in Yorkshire on April 30th 1920 and joined the Army as World War Two got under way. He served with the  8th Battalion The Duke of Wellington’s Regiment in India and the Far East before working at the Army base at Bovington after the conflict ended. He began his walk earlier in April to support his local NHS.