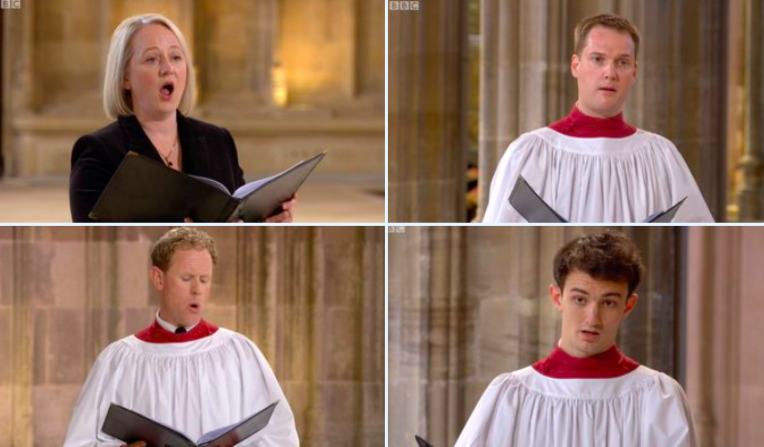 The choir of four voices at the funeral of Prince Philip, Duke of Edinburgh, has been widely praised for their powerful and moving performances on Saturday.

Due to government guidelines on social distancing, there had to be alterations to the original plans for Philip’s funeral, with the choir that was planned unable to perform.

Congregational singing is not allowed in any place of public worship in England, as such, only four individuals performed ensuring the rules were met.

The choir consisted of Miriam Allen, an Australian born soprano who lives in Windsor with her husband and three children.

After the service, Miriam tweeted to say “It was an honour” to perform at Prince Philip’s funeral.

The other three singers were Tom Liliburn, Nick Madden and Simon Whiteley who are all Lay Clerks of St. George’s Chapel Choir.

They were conducted by James Vivian and the organ was played by Luke Bond.

Music performed during the service includes the Royal Navy hymn, Eternal Father, Strong to Save as well as Britten’s Jubilate in C which Prince Philip commissioned specifically for St. George’s Chapel Choir.

The ceremony ended with the National Anthem, again sung by the four lone voices of the choir.

Thousands of people took to social media after the ceremony to praise the choir for an extraordinary job in difficult circumstances.

Matt Hatch tweeted: “This choir is wonderful. So effective in its simplicity.”

Another user said: “The choir are exceptional, and the pieces are beautiful. Sombre and powerful.”