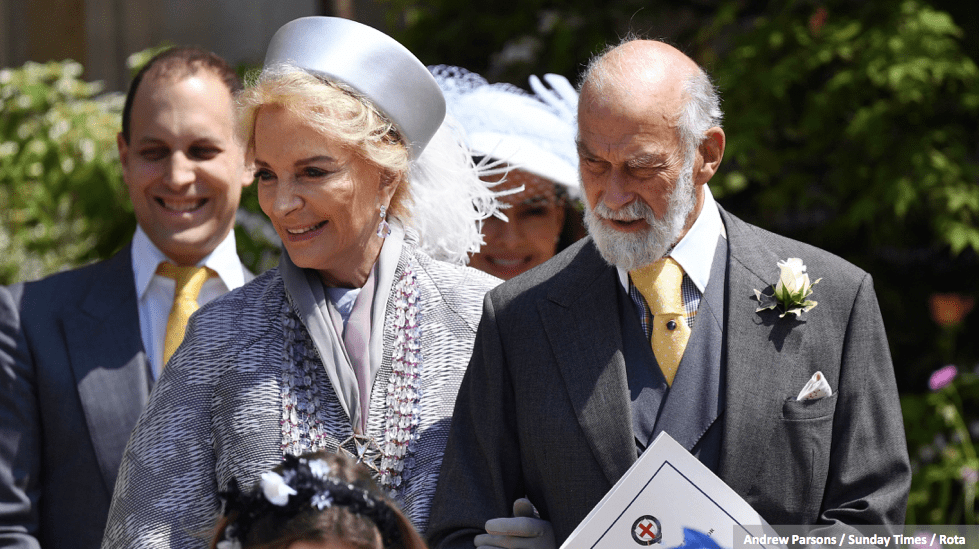 Michael is the paternal first cousin of Queen Elizabeth II, and Marie Christine is of German, Austrian and Hungarian noble descent. She is the only daughter of Silesian nobleman Baron Gunther von Reibnitz and his Austro-Hungarian wife, Countess Maria Szapáry de Muraszombath.

The marriage made headlines at the time because Marie Christine von Reibnitz was not only a Roman Catholic but also a divorcée. Marie Christine was previously married to banker Thomas Troubridge, and the two separated in 1973 and divorced in 1977. The marriage was annulled by the Roman Catholic Church a year later and just two weeks before she married Prince Michael.

Michael proposed to Marie Christine with a two-stone sapphire-and-diamond ring with a very personal touch. It was made from gems that belonged to his late mother, Princess Marina, Duchess of Kent (who was born a princess of Greece and Denmark).

Prince Michael of Kent and Marie-Christine von Reibnitz married in a civil ceremony at Vienna’s Rathaus (City Hall) in Austria. However, royal representation was limited. The groom’s brother, the Duke of Kent, and his sister, Princess Alexandra, attended as did Princess Anne and Lord Mountbatten. The couple later received a blessing of their marriage in a Roman Catholic ceremony on 29 June 1983 at the Archbishop’s House in London.

For the reception held after the wedding, Marie Christine wore the City of London Fringe Tiara and a 70s style dress. Upon marriage, she was accorded the style and title of Her Royal Highness Princess Michael of Kent, the female equivalent of her husband’s title.

Under the Act of Settlement 1701, a bill passed by Parliament ensuring that only Protestants could ascend to the throne, Michael forfeited his place line of succession to marry a Roman Catholic. However, the Prince was later reinstated after the Succession to the Crown Act 2013. This bill altered the laws of succession to the throne and famously ensured that the eldest child, regardless of sex, precedes his or her younger brothers and sisters.

Prince and Princess of Michael of Kent’s children are members of the Church of England and have been in the line of succession since birth. Lord Frederick Windsor was born 6 April 1979 at St Mary’s Hospital in London; his sister, Lady Gabriella Kingston, was born at the same hospital on 23 April 1981.

The royal wedding of Prince and Princess Michael of Kent is one of many featured in our new book, out now. Royal Weddings: A Collection is available on Amazon as a paperback and an ebook.