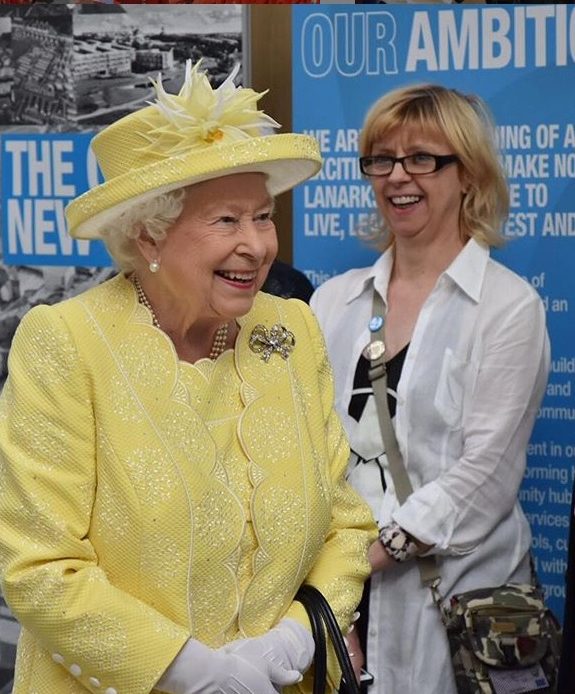 In addition to the now-iconic double-and triple-strand pearl necklaces The Queen has frequently sported throughout her life as part of an unofficial uniform, she also has at her disposal many pearl pieces (necklaces, brooches, and earrings) that she wears with her outfits.

Today, we’re going to look at some of the classic pearl pieces The Queen likes to wear.

The Queen received a demi-parure of pearls and diamonds from the Emir of Qatar during her state visit to the country in 1979 and also included a pair of matching earrings.

The pearl and diamond necklace features six strands of pearls offset with smaller diamonds throughout that span two strands and features a large diamond plaque that spans all six strands.

The Queen Mother inherited this shell brooch — featuring rows of diamonds to create the shell effect, and a large pearl in the centre with more diamond rows underneath — in 1944 by Winifred Hope Thomson, the sister of its designer, Lord Courtauld Thomson, who’d created it in 1919.

The Queen Mother wore the brooch regularly, including at her centenary birthday celebrations in 2000, and left it to her daughter, Queen Elizabeth upon her death in 2002. The Queen wears it regularly, especially at events that centre around her parents.

Queen Mary received the Kensington Bow brooch as a gift from the Kensington Wedding Gift Fund upon her marriage in 1893. The brooch, which was made by Collingwood & Co. Jewellers, features a bow motif of diamonds set in silver and gold and a detachable pearl pendant attached to the central diamond by its own pave diamond setting.

The Queen inherited the Kensington Bow brooch upon Queen Mary’s death in 1953 and frequently wears it at state events to fasten her sashes or anchor the poppies at Festival of Remembrance events.

The Queen received this unique pearl brooch from the Prime Minister of New Zealand, John Key, during a visit to Balmoral Castle in 2013. The brooch, which royal jewel experts believe is the only blue pearl Her Majesty owns, is a floral design with the petals represented as metal and diamonds flanking the blue pearl.

The Queen received a pearl shell from the ruler of Bahrain on her wedding day in 1947 and from that shell came seven pearls. Two of them were used to create this pair of earrings that Her Majesty wore regularly in her early reign.

The earrings are created with a round diamond at the stud with a smaller one, and then three baguette diamonds in the centre, followed by the rest of the small diamonds and ends with a Bahrain pearl.

The Duchess of Cambridge and The Countess of Wessex have both worn these earrings in recent years.

Queen Victoria received these pearl drop earrings, anchored with two diamonds and diamond studs that were already a part of the royal collection, in 1847 from her husband, Prince Albert. Upon her death in 1901, this pair of earrings was left to the Crown, and The Queen began wearing them in 1952 when her reign started.

Queen Elizabeth inherited this pearl bracelet upon the death of her grandmother, Queen Mary, in 1953, and regularly wears it with her pearl jewellery. The bracelet includes a diamond clasp and was most recently worn at the State Banquet for the President of Indonesia in 2012.