GALLERY: The Duchess of Gloucester through the decades 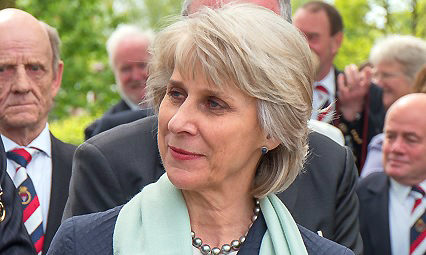 Today, Birgitte, the Duchess of Gloucester, will celebrate her 75th birthday. A Danish member of the British Royal Family, Birgitte is married to Prince Richard, the Duke of Gloucester, who is a first cousin of Queen Elizabeth II. Together the couple has three children: Alexander Windsor, Earl of Ulster (b. 1974), Lady Davina Windsor (b. 1977), and Lady Rose Gilman (b.1980). On her milestone birthday, Royal Central is taking a look at key moments of the Duchess’s life through the decades.

In February 1972, Birgitte and Richard announced their engagement. The future duchess was given a ring of coral and silver designed by her future husband. The two met in the late 1960s in Cambridge while he attended university.

Birgitte van Deurs married Prince Richard of Gloucester at St Andrew’s Parish Church, Barnwell, Northamptonshire. The bride wore a dress designed by Norman Hartnell and instead of wearing a tiara, she wore stephanotis flowers on her hair to secure the veil. The word stephanotis derives from the Greek word, stephanōtís meaning fit for a crown.

The Duke and Duchess pictured at the christening of their daughter, Lady Rose, at Barnwell Parish Church near Peterborough. Rose was born on 1 March of 1980.

The Duke and Duchess pose at their home in Kensington Palace to mark their 17th wedding anniversary.

The Duke and Duchess are pictured with their children, Earl of Ulster, Lady Davina, and Lady Rose, at their home in Barnwell Manor in Northamptonshire. The exact date this photo was taken is unknown.

The Duke and Duchess arrive for The Amir of Kuwait banquet at Claridge’s Hotel in London.

The Duke and Duchess arrive at The House of Lords for the State Opening of Parliament.

The Duke and Duchess attend a dinner held by The Corporation of London to mark the 90th anniversary of The Order at Guildhall in London.

The Duchess poses with residents in East London during a Coronation Party to celebrate the 60th anniversary of the coronation of Queen Elizabeth II.