The Duchess of Cambridge takes part in friendly Commonwealth race 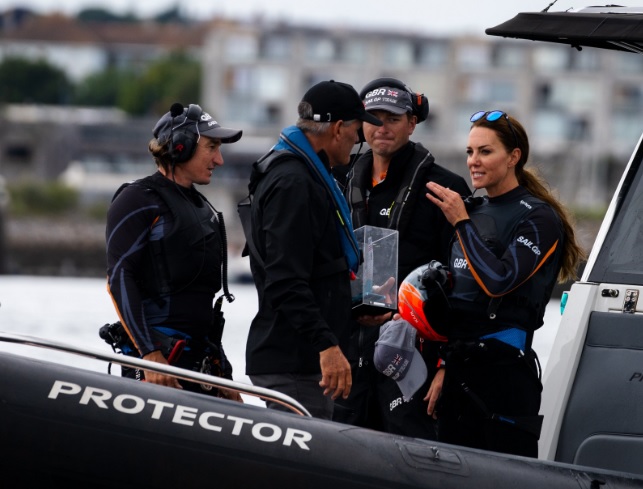 The Duchess of Cambridge has spent a day at sea with the 1851 Trust, joining in as the team participated in the Great Britain Sail Grand Prix.

Kate joined in with Team Great Britain for a pseudo-Commonwealth race around the coast at Devon against Team New Zealand.

The Duchess of Cambridge, patron of the 1851 Trust, joined the team, headed by Sir Ben Ainslie for a quick-paced race. Team Great Britain ultimately defeated Team New Zealand, which was led by Peter Burling and featured Lewis Pugh as a guest sailor.

Ainslie told reporters, “She’s a really good sailor in her own right, she has sailed with me on foiling boats as well and we’re expecting a little bit of extra help.”

The 1851 Trust was created as a way to teach young people about the benefits of science education and careers in a fun environment bolstered by sailing. Ainslie is quoted on the Trust’s website talking about the “inspiring journey where sport and science meet, where adventure and excellence meet.”

During her visit on Sunday, Kate also took part in a workshop devoted to teaching sustainability skills to young people. The lesson focused on seagrass, with the students creating seagrass mats to send to the Plymouth Sound to help marine life and blue carbon capture.

After taking to the water to complete their Commonwealth Race, the Duchess tweeted: “Can say for sure that the world’s first climate positive sport is fast, frenetic and fiercely competitive!”

It was a busy, sporty day for the Cambridges. William attended the Women’s Euro final at Wembley Stadium, cheering as the Lionesses defeated Germany 2-1. Earlier in the day, Princess Charlotte also appeared in a video message to the Lionesses, wishing them luck and sharing her hopes that they would win.