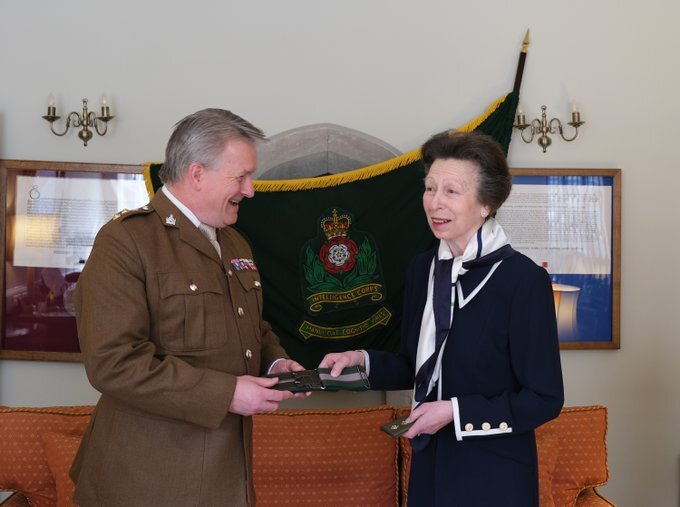 The Princess Royal has followed in her father’s footsteps with her latest military appointment, becoming Colonel in Chief of the Intelligence Corps.

In a meeting on Thursday, Princess Anne met with the Intelligence Corps Commandant Lt Gen Sir Jim Hockenhull and Col Mike Peebeles, its Aide-de-Camp, at St James’s Palace to formally accept the appointment. While the trio met, they also discussed the late Prince Philip’s involvement with the Corps, the history of the Corps, and its future plans.

“The Corps Colonel and I are thrilled at the appointment of Her Royal Highness, The Princess Royal, as our new Colonel in Chief,” said Lt Gen Sir Jim Hockenhull in a statement on the British Army’s website. “The Duke of Edinburgh had a coveted relationship with the Intelligence Corps whereupon he provided leadership and inspiration to all Corps personnel.

“It is a huge honour that Her Royal Highness will be taking on this role, and the Corps is looking forward to welcoming her into the strong Corps family and benefiting from her wisdom and guidance.”

Prince Philip previously served as Colonel in Chief of the Intelligence Corps from 1977 until 2021.

The Intelligence Corps, in its current form, has been active since 1940. Prior to that, it was active from 1914 to 1929. The Corps’ main goal is to gather information and parse it for analysis. It is one of the British Army’s smallest units; its website states that its soldiers play a key role in all aspects of decision-making straight out of training.

Princess Anne is also the Colonel in Chief of many British Army Corps, including the King’s Royal Hussars, The Royal Corps of Signals, The Royal Army Veterinary Corps, and the Royal Logistic Corps, as well as various military appointments throughout the Commonwealth.