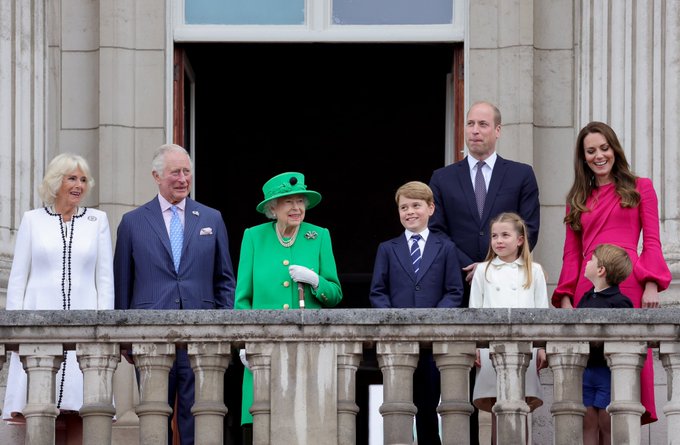 The Queen made one final surprise balcony appearance on Sunday afternoon as the Platinum Jubilee celebrations came to an end.

Joined by three kings in waiting, the eyes of the nation were just as much on the future as they were on the monarch who’s led the UK and the Commonwealth for 70 years.

In the final hour of the Platinum Jubilee Pageant, eagle-eyed attendees spotted the Royal Standard being raised at Buckingham Palace, an indication that The Queen had just arrived at her London residence and fuelling rumours that perhaps a balcony appearance would close out the celebrations.

When The Queen walked out onto the balcony after a poignant performance by Ed Sheeran celebrating the love story of Her Majesty and the late Prince Philip, it was to uproarious applause.

Joining The Queen were the Prince of Wales and the Duchess of Cornwall, and the Duke and Duchess of Cambridge and their three children, Prince George, Princess Charlotte and Prince Louis. After much cheering, the crowd began to sing ‘God Save The Queen’ before The Queen, dressed in emerald green, returned inside the palace.

The Queen was immediately surrounded by Prince Charles, Prince William and Prince George, highlighting the future one last time in a weekend where continuity and the future has also been on display.

With her increasing mobility issues, The Queen hasn’t been as present at Platinum Jubilee celebrations as some might have liked, though Prince Charles and Prince William—and the Princess Royal, too, at the Derby—have stepped in and represented her throughout the weekend.

At Friday’s Service of Thanksgiving, the Archbishop of York paid tribute to the absent Queen, saying: “Your Majesty, we’re sorry you’re not with us this morning in person, but you are still in the saddle. And we are all glad that there is still more to come.

“So, thank you for staying the course. Thank you for continuing to be faithful to the pledges you made 70 years ago. Thank you for showing us how service and faithfulness matter. People of all faiths and none can learn from this.”

The Royal Family Twitter account shared a photo of The Queen and her direct heirs on the Buckingham Palace with the caption: “A wonderful end to the @Jubilee_Pageant!”