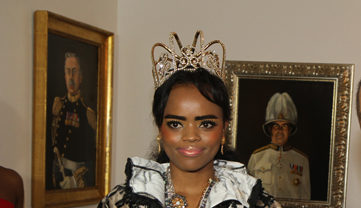 In a series of posts on her Instagram account, Eswatini’s Princess Sikhanyiso, 32, revealed that she is expecting a son.

The posts were from her baby shower at Nkoyoyo Royal Palace which featured a sign that said, “It’s a boy! A little prince is on the way!!”

Her Instagram was flooded with congratulatory messages from those inside and outside the kingdom.

The Princess confessed in one post that she was “now counting down the days,” in a clear reference regarding when she can meet her baby boy.

The new royal will be a grandson to Eswatini’s King Mswati III and Queen Sibonelo. Princess Sikhanyiso is the King’s eldest daughter and serves as the country’s Minister of Information and Communication Technology.

No details have been revealed regarding the baby’s due date.

King Mswati III, Africa’s last absolute monarch, has been on the throne since 25 April 1986. As part of Eswatini law, he is joint head of state with his mother, the Queen Mother Ntfombi.

As part of Eswatini culture, the King practises polygamy. He has 15 wives and 35 children.