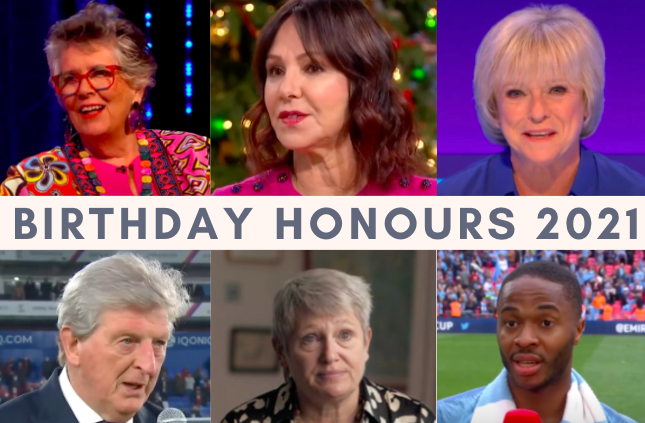 Arlene Phillips, Prue Leith and Roy Hodgson are amongst the famous names who are being recognised in The Queen’s Birthday Honours List 2021.

In a year that has seen a pandemic test the strength and resolve of the country, it is unsurprising that almost 23% of recipients are recognised for their services in relation to Covid-19.

Restaurateur, chef and television presenter, Prue Leith, leads the way as she is awarded with a Damehood.

Dame Prue, best known as being a judge on the Great British Bake Off, receives her honour for services to food, to broadcasting and to charity.

Dame Arlene, who has choreographed numerous West End and Broadway musicals, films, and television shows, has been recognised for her services to dance and charity.

In the world of music, singer Lulu receives a CBE for services to music, entertainment and charity.

Receiving OBEs are singer-songwriters Skin and Alison Moyet, both to recognise their significant contribution to the music industry.

Pianist Imogen Cooper CBE has been made a Dame for services to music.

Ahead of the Euros tournament, footballers lead the way in the sporting landscape, with two England players named in the Birthday Honours List.

Jordan Henderson receives an MBE for services to football and charity, particularly during the Covid-19 pandemic.

Teammate Raheem Sterling has also been recognised with an MBE for services to racial equality in sport.

Former manager of Crystal Palace Football Club, Roy Hodgson, has been awarded a CBE for services to football.

Sport commentator and A Question of Sport presenter, Sue Barker, receives a CBE for services to sport, broadcasting and charity.

To recognise the significant contribution made in vaccinating the nation, Kate Bingham, lately Chair of Vaccine Taskforce, is to become a Dame for services to the procurement, manufacture and distribution of COVID-19 vaccines.

Three Members of Parliament have been named in the 2021 Birthday Honours.

Andrea Leadsom and Meg Hiller will both become Dames, whilst Tony Lloyd is knighted for political service.

The Earl Howe has been appointed a Knight Grand Cross of the Order of the British Empire for political and parliamentary service.

Edward Ollard, lately Clerk of the Parliaments, has been appointed as a Knight Commander of the Order of the Bath for services to Parliament.

Actor Jonathan Pryce CBE has been knighted for services to drama and charity.

Nick Ross, the broadcaster best known for presenting Crimewatch, has been awarded a CBE for services to broadcasting, charity and crime prevention.

Radio presenter Simon Mayo has been awarded an OBE for services to broadcasting.

This year’s list is the most ethnically diverse list to date, with 15% of recipients coming from an ethnic minority background.