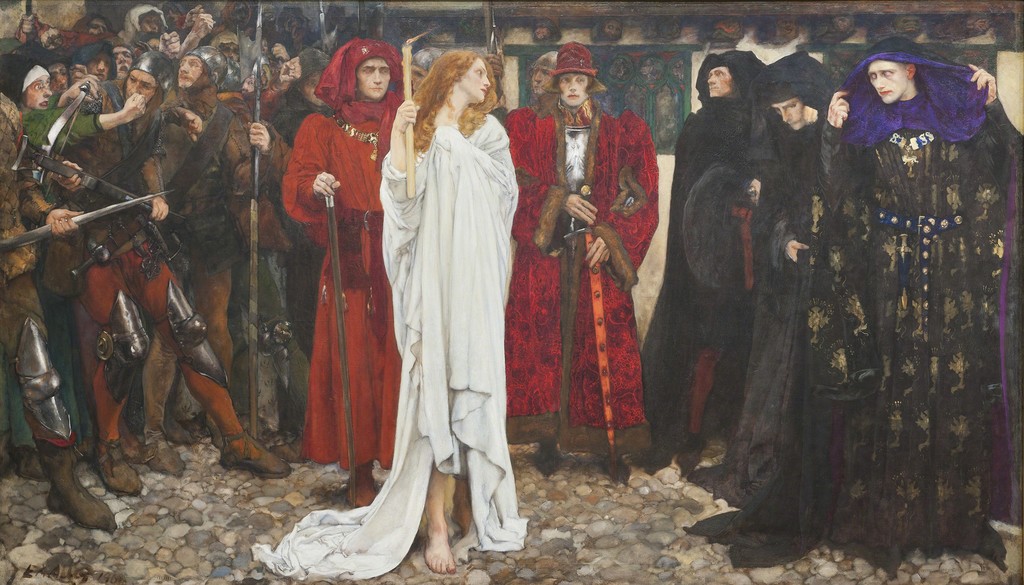 Eleanor Cobham is perhaps one of the lesser known royal wives of medieval times. As with most women of her time, not much is known of her youth. She was born around 1400, probably at Sterborough Castle in Kent, which didn’t survive the reign of Oliver Cromwell. Her parents were Reginald Cobham, 3rd Baron Sterborough, 3rd Lord Cobham and Eleanor Culpeper.

When she was around 22 years old, she became a lady in waiting to Jacqueline, Countess of Hainaut, who had fled to England from her husband John IV, Duke of Brabant. After obtaining a questionable annulment, she married Humphrey, Duke of Gloucester, who was the youngest son of Henry IV. Humphrey was the Lord Protector of the young Henry VI.

Around 1425, Eleanor became Humphrey’s mistress, and three years later he had his marriage to Jacqueline annulled. Jacqueline retired to her lands in the present day the Netherlands, where she married for love and died tragically young. Humphrey and Eleanor married sometime between 1428 and 1431. They held court at the Palace of Placentia at Greenwich, which was known for its flamboyance. In April of 1436, she received the robes of a Duchess for the Garter ceremony. In 1435 Humphrey’s brother John, Duke of Bedford died, and suddenly Humphrey was the heir presumptive to his nephew.

Eleanor liked to consult astrologers to predict the future. Two astrologers predicted that Henry VI would suffer a possibly fatal illness in the summer of 1441. His death would make Humphrey King and Eleanor his Queen. When this got back to the King’s council, they too consulted astrologers, who did not see the same future. The two were soon arrested on charges of treasonable necromancy. It would soon become clear that Eleanor was the source of the prediction, and she too was arrested.

Eleanor naturally denied most of the charges, though she did confess to using potions to help her conceive. Nevertheless, she and the two astrologers were found guilty. While one died in the Tower of London, the other was hanged, drawn and quartered. The so-called witch from whom Eleanor had gotten the potions was burnt at the stake. Eleanor was spared execution, but she was forced to do public penance in London. She was divorced from her husband and sentenced to life imprisonment.

Her public penance took place on 13 November 1441. She was taken from Westminster to Temple Bar, where she walked, bareheaded and dressed in black, carrying a wax taper to St. Paul’s Cathedral, where she offered the taper at the high altar. Two days later the process was repeated when she walked from the Swan Pier on Thames Street to Christ Church, where she again offered her taper. A third journey was made from Queenhithe to St. Michaels in Cornhill, where she also offered her taper. The crowds who had come to watch her humiliation were ordered not to respect her, but also not to molest her.

Initially, she was imprisoned in Chester Castle, before being to Kenilworth Castle, Peel Castle on the Isle of Man or to Beaumaris Castle. Even her place and time of death are unclear. She died between 1446 and 1457, probably at Peel Castle where she is also said to be buried. (Weir, Alison (1999). Britain’s Royal Family: A Complete Genealogy. London: The Bodley Head. ISBN 978-0-09-953973-5). Another source claims she was at Beaumaris Castle in Anglesey when she died on 7 July 1452. (Harris, G. L. (January 2008). “Eleanor , Duchess of Gloucester (c.1400–1452)”. Oxford Dictionary of National Biography (online ed.). Oxford University Press). The result stays the same.

Eleanor may have been the mother of Humphrey’s two illegitimate children, but there are no exact records confirming Eleanor as their mother, and he made no attempt to legitimize them upon marriage.

Eleanor’s dabbling in witchcraft shows us two different sides of her. She wanted to predict the King’s death, leading us to believe she had some ambition for a throne for herself. On the other hand, she used potions to try to conceive, which shows us a more humane side of her. Unfortunately, we might never know the real Eleanor.