Tombs of Kings of England not in England 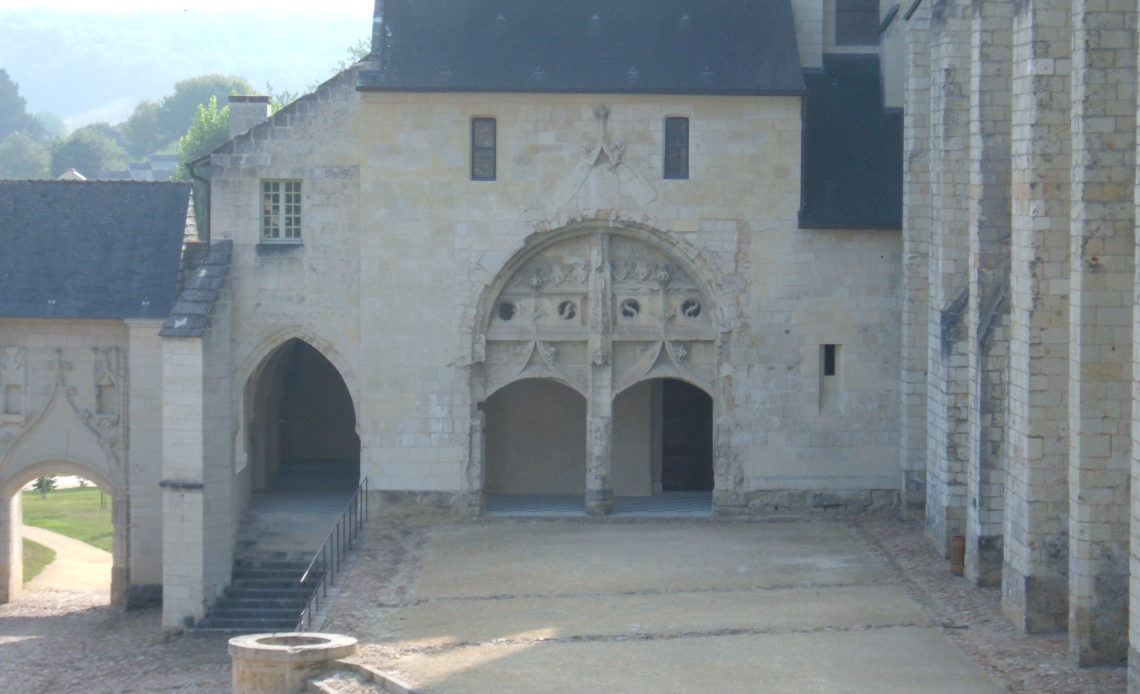 Outside of the traditional burial sites of Westminster Abbey and St George’s Chapel, Windsor, some English (and British) monarchs are missing. The tomb of King John resides in the chancel at Worcester Cathedral, not far from the chantry that contains the grave of the son of Henry VII and Elizabeth of York, Henry VIII’s elder brother Arthur, Prince of Wales. That of King Edward II is also one of only a handful of monarchs whose tomb is not in London but instead in the north ambulatory of Gloucester Cathedral. That of Richard III is now – since 2015 – in Leicester Cathedral. Queen Victoria chose to erect a Royal Mausoleum for herself and Prince Albert in the grounds of the royal estate of Frogmore in Windsor Great Park, the Royal Burial Ground in front of the Mausoleum contains royal graves from the twentieth century, including that of the Duke of Windsor – the former Edward VIII – and the Duchess of Windsor.

However, several monarchs are not in England, far from Windsor and Westminster. The reasons why they are where they are tell extraordinary stories of their own. More often than not, the final places of rest are linked to where they were when they died, such as Prince Charles Edward Stuart, ‘Bonnie Prince Charlie’, whose story began with his birth in Rome – at the Palazzo Muti on Rome’s Piazza dei Santi Apostoli – where he also died 68 years later in a tragic, full circle of Stuart history. (A solemn plaque in the Palazzo’s porte-cochere commemorates the Palazzo Muti’s link with the Stuarts.)

The tombs of the Jacobite heirs (from the Latin ‘Jacobus’ for Jacob – a nominal cognate of James) – Prince James Frances Edward Stuart ‘The Old Pretender’ (whose birth was the occasion of the ‘warming-pan incident’ of 1688) and his sons, Prince Charles Edward Stuart ‘Bonnie Prince Charlie’ and Henry Benedict Stuart, Cardinal of York – all of course, English kings who never were – are still to be found in the crypt at St Peter’s Basilica in Rome. In 2016, Britain’s Ambassador to the Holy See, Ambassador Nigel Baker, lay a wreath at the tomb of the ‘Old Pretender’ on the 250th anniversary of James Francis Edward Stuart’s state funeral (Catholic Herald, 12. 1. 2016) Ambassador Nigel Baker said, commenting on the occasion: “Our simple wreath-laying ceremony was, in a way, one of historical reconciliation”. Also participating in this unique ceremony was Lord Nicholas Windsor, the British Royal Family’s most senior Catholic (male) member.

So, who is missing?

William I (‘the Conqueror’) resides at Caen, in the Abbaye-aux-Hommes, which he founded in 1063. Then there are the former Plantagenet royal tombs at the French abbey of Fontevrault – Henry II and Richard I, the perennially fascinating Queen Eleanor of Aquitaine – consort of Henry II and mother of Richard I – and of Isabella of Angouleme. The royal tombs were originally in the abbey vault but are now within the abbey church, because the crypt was – like the Bourbon vault at St. Denis for example – ransacked during the French Revolution, the royal remains at Fontevrault dispersed and never recovered. The abbey at Fontevrault later became a prison and remained as such until 1963 when the abbey was restored. The four tombs, empty of their remains, were replaced in the church. The tombs themselves are particularly poignant because the effigies themselves are now the substitutes for their former contents. Despite the tumultuous pillaging of the Revolution, they manage to convey a certain calm serenity.

Belonging to this group of English kings, is also Britain’s first Hanoverian king, George I. The King was in Germany when he died suddenly in 1727, as Princess Wilhelmine of Prussia recorded in her Memoirs – (the exact accuracy of which are open to question, as Wilhelmine probably exaggerated a great deal in her Memoirs) the death of her maternal grandfather: “He had left England in perfect health and, contrary to custom, had endured the voyage uncommonly well. He felt indisposed near Osnabruck. All the remedies that were administered proved useless; and at the end of four and twenty hours he expired, in an apoplectic fit, in the arms of the Duke of York, his brother” (The Misfortunate Margravine, ed. Norman Rosenthal, Pg 108, 1970).

The remains of King George I were initially placed in the vault of the Hanoverian Leineschloss (Leine Palace) but were later moved to the Guelph Mausoleum in the Berggarten of Hanover’s magnificent Herrenhausen Gardens – one of the surviving glories of all European baroque eighteenth-century formal gardens. The gardens at Herrenhausen were the spectacular creation of George’s mother, Electress Sophia of Hanover, herself a Queen of England who could have been, but who died shortly before the death of England’s last Stuart, Anne in 1714.

The 1701 Act of Settlement had designated Sophia heiress presumptive to the Crown – “the most excellent princess Sophia, electress and duchess-dowager of Hanover”. So, George I became the British heir presumptive on the death of his mother, as the Act stated that the British succession went to “the heirs of her body, being Protestant.” Writing of George I in his Four Georges, William Makepeace Thackeray observed, “His heart was in Hanover” – an accurate observation, as George was deeply attached to his native Hanover, of which he had been Elector, succeeding his father Ernst August of Braunschweig-Luneberg.

Quite literally, though and appropriately for George I, George would indeed remain in his beloved Hanover, which had been relegated to a holiday destination for him once he became British King. The Guelph Mausoleum was constructed between 1842-47 and was firstly the resting place of King Ernst August of Hanover and his consort, Queen Friederike. Following the air raid destruction of the Leineschloss and its chapel in 1943, the sarcophagi of Great Britain’s George I, Electress Sophia and Ernst August of Braunschweig-Luneberg were moved from the royal vault (Fürstengruft) in 1957 and transferred to Herrenhausen, whilst the remnants of the Leineschloss formed the basis for the new building that today houses Lower Saxony’s Parliament (Landtag).

Later, the remains of Ernst August, Duke of Braunschweig were placed in front of the mausoleum and were joined by those of his wife Victoria Luise, Princess of Prussia and Duchess of Braunschweig, the popular (only) daughter of Kaiser Wilhelm II and his Empress, Augusta Victoria. The Guelph Mausoleum (Welfenmausoleum) is a protected monument and is the primary ancestral vault of the Guelph dynasty, with a similar branch of it in the royal vault at Celle.

Then there is the ‘mysterious’ tomb of James VII/II in France, the ‘King over the water’ – far from those of his heirs in Rome, in the next generations. The exiled James was granted the use of the royal chateau of Saint-Germain-en-Laye, in fact, the same palace where his mother, Charles I’s French-born Queen Henrietta Maria, had set up her own court in exile during the Civil War. The former King of England died at Saint-Germain-en-Laye on 16 September 1701 – the year of the passing of the Act of Settlement.

Whilst Louis XIV acknowledged the heir, James Francis Edward Stuart as James III, England did not follow suit and merely christened him ‘the Old Pretender’ instead, a name to which history has stuck. The chapel of James II in the church at Saint-Germain bears the English royal coat of arms. There are conflicting stories as to the memorial. It was either erected in 1824 at the behest of Britain’s George IV; Saint-Germain-en-Laye’s tourist board alternatively suggests that the James II’s ‘mausoleum’ in the church was designed by Moutier and Malpièce, and completed in 1835, in the reign of George IV’s successor, William IV.

James II’s heart was enshrined in silver gilt and apparently given to the convent at Chaillot, whilst his body was wrapped in two caskets of wood and a third of lead. Contemporary calls for the Catholic James’s canonisation have not been realised. The Scots College in Paris was reputedly given the brain of James II.

Once again, like at Fontevrault, the church at Saint-Germain was broken into during the French Revolution, but opinion is divided as to exactly what happened to James’s remains at Saint-Germain before the erection of the chapel in the church. Some sources state that they were scattered in the Revolution, whilst an alternative theory suggests that his body was kept ‘above ground’ after the desecration of the church and only placed within the chapel when George IV ordered its burial in 1824. Whatever the truth of the matter, the memorial – like the effigies at Fontevrault – remain as the most tangible witness, even if it, like those, are empty.