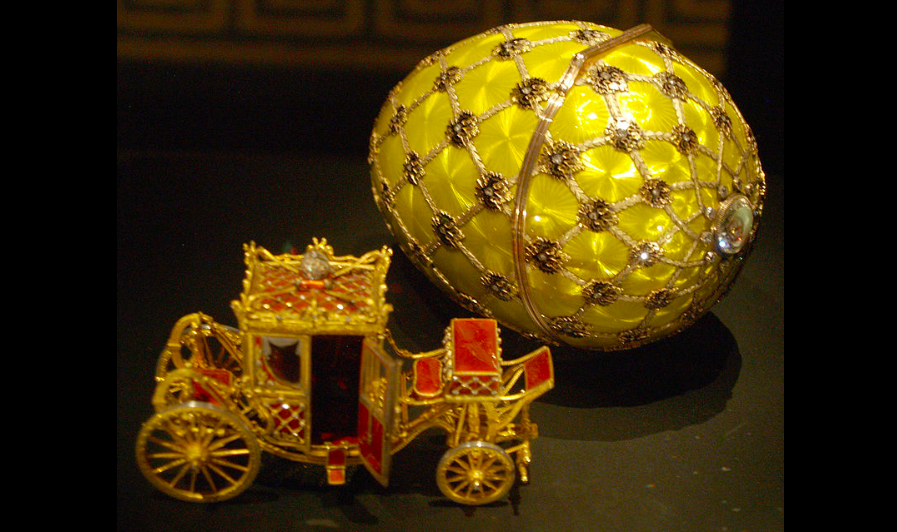 The Imperial Coronation egg, one of the most famous and iconic of all the Fabergé eggs [Photo: Miguel Hermoso Cuesta]

Probably best known for the exquisite Easter eggs that he crafted for the Russian Imperial house of Romanov, Peter Carl Fabergé was Russia’s premier master goldsmith at the beginning of the twentieth century, the House of Fabergé having been founded in St. Petersburg by his father, Gustav Fabergé in 1842. Although Fabergé would go on to design spectacular objects of ornamentation such as jewellery, jewelled flowers, enamel boxes and photograph frames, walking sticks, clocks and even a collection of animals, his Easter eggs are extraordinary creations of beauty which continue to fascinate.

With the Easter egg being a paschal symbol of Christ’s Resurrection as well as rebirth that enjoys considerable popularity in the West, from what we know, the oldest known eggs to celebrate this feast were those of hen’s eggs, decorated with dye. Easter eggs can be traced back to the early Christians of Mesopotamia and were thereafter adopted by the Orthodox church. Russian Orthodoxy views Easter as its most important Christian festival, so it is clear that the egg in Russia would be seen in an even more special light than it would elsewhere. Although modern tradition has come to accept the chocolate egg as the quintessential Easter gift, what Peter Carl Fabergé produced in St. Petersburg has become for many a means of understanding something of imperial Russia itself, gained through a study of the gifts that the Imperial family exchanged. Many of the eggs that Fabergé made were lost for years in the wake of the Russian Revolution but fortunately, enough now exist in private collections and museums to allow us to enjoy them in a public way as their private owners once did. In 2014, the Third Imperial Easter Egg came to light by an extraordinary circumstance. Purchased at a flea market, this egg, which was originally commissioned in 1887 by Tsar Alexander III for his wife Empress Marie Feodorovna, numbered among those eggs which hadn’t been traceable until then. Lost for years, it constituted one of the most exciting finds in the jewellery world in recent years.

But what were the origins of these jewelled eggs and what kind of occasions would constitute their being commissioned? The order for the first imperial egg came from Tsar Alexander III in 1885, which he presented to his wife the Empress Marie Feodorovna. Outwardly much plainer than the opulent examples that the master goldsmith would later develop, it was thought to have been inspired by a Danish example owned by the aunt of his Danish-born wife Dagmar – as Marie Feodorovna was originally known – Princess Wilhelmine Marie of Denmark. This First Egg was simply called the (Jewelled) Hen Egg. This egg opened to reveal a yolk in gold that in turn contained a hen, which also had a tiny crown inside it. Empress Marie Feodorovna was entranced by the gift and so the time-honoured tradition of exchanging eggs in Orthodox Russia was thus continued and through this another one born. And it was a tradition that was to endure for the next thirty one years until 1916.

The penultimate egg that Tsar Alexander III had made was the Caucasus Egg, featuring rose-cut diamonds, pearls, rock crystal and enamel, as well as watercolours on ivory. The latter was typical of the type of designs that the eggs had come to include by this point; rich in personal meaning, they often commemorated anniversaries, births and historical events. They did this either by the watercolour paintings that they included in their design, or through other symbolisms such as the by now long-established ‘surprise’, usually contained within the egg when its mechanism was opened. The last of the eggs that Alexander III commissioned from Fabergé for his wife was the so-called Renaissance Egg in 1894 – a year of his death. At the accession of Alexander III’s son Tsar Nicholas II, the paschal tradition was continued with the first egg of the reign being commissioned in 1895. Known as the Rosebud Egg, it opened to reveal a yellow rosebud – full of romantic meaning for a couple who had married in November 1894, a mere seven days after the state funeral of Tsar Alexander III. Like the First Egg once did, this opulent egg also contained a small imperial crown, a clear reference to the impending coronation of the future Empress Alexandra Feodorovna and Nicholas II in 1896. The coronation itself was commemorated by its own egg in 1897, known as the Imperial Coronation Egg and containing its own miniature gilded coach.

It is certain that at least fifty-four imperial eggs were made, although it is possible that this number could have been as many as fifty-seven. Notable collections that contain examples of these exquisite eggs include the Royal Collection, the Metropolitan Museum of Art in New York, the Kremlin Armoury in Moscow, the Virginia Museum of Fine Arts in Richmond, Virginia, the Walters Art Museum in Baltimore and the Hillwood Museum in Washington D.C.

It is pleasant to note that the company of Fabergé still continues to enchant worldwide with its collections, which range from imperial themed objects to timepieces to luxury jewellery. Given the history of the imperial egg, it is particularly pleasing to see that egg pendants and egg charms are numbered among the above.