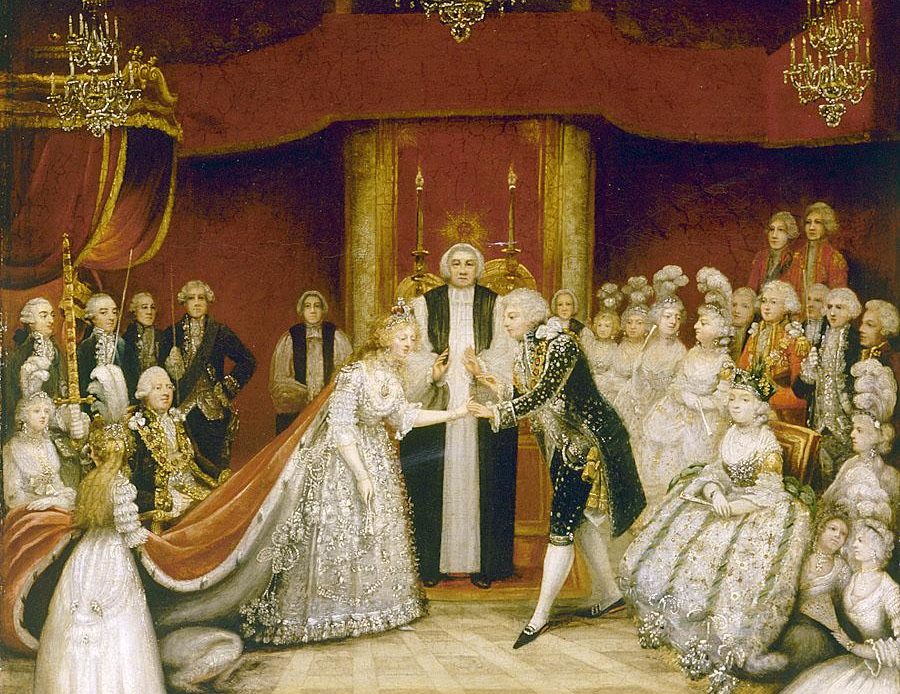 We all love a groom who cries as his bride walks towards him, and when it’s a royal groom, it’s even better. However, rewind a couple of centuries, and a weeping prince at the altar was no laughing matter. For when George, Prince of Wales and king in waiting wed Caroline of Brunswick on 8 April 1795 the tears of the groom were a public demonstration of his unhappiness in a marriage that hadn’t even taken place yet.

To be fair, his bride was equally unimpressed with him. George and Caroline, like many a royal couple before them, had been paired up by the regal matchmakers who wanted to tie families and fortunes together. However, unlike most other royals arriving at church for arranged marriages, this couple had absolutely no embarrassment about showing their displeasure to anyone and everyone passing by. From the moment they met to the day that she died, this couple made no secret of the fact they loathed each other.

It all began with a pile of debts and a princess looking for adventure. George, who was 32 at the time of his marriage, had racked up all kinds of bills thanks to his love of wine, women and more wine. He also showed absolutely no sign of finding a suitable wife on his own and so a deal was proposed. If the heir to the throne wed a suitable, Protestant princess then all his debts would be paid. Being as they then totalled over £600,000, the offer was a good one.

Caroline, aged 25, quickly rose to the top of the possible brides list. For a start, she was a cousin of the groom – her mother, Augusta, was the big sister of George’s father, King George III. Her father, Charles William, was Duke of Brunswick and a useful ally in Britain’s wars against France. And Caroline, like many a princess in the marriage market before her, found herself flattered with portraits and praise. The couple agreed to marry before even meeting, and Caroline set off from home at the end of 1794.

There were already flies in the ointment. For a start, George had entered into a secret marriage with Maria Fitzherbert in 1785. It was in contravention of the Royal Marriages Act so didn’t count, but it was widely known about and hardly the foundation for a royal wedding romance. Caroline, meanwhile, was rumoured to have had relationships before her engagement was announced.

And once the marriage plans were put in place, more reservations arose. Lord Malmesbury had been sent to escort the Princess to her wedding and wrote in his diary that she rarely washed or changed her clothes and lacked any tact or decorum. He kept his counsel and presented the Princess to her future husband who immediately asked for a glass of brandy.

You needn’t feel too sorry for Caroline here because she was straight back with a jibe. The princess bride said her husband to be was ”nothing like as handsome as his portrait” as well as being rather on the large side and things went from bad to worse when George appointed his mistress, Lady Jersey, as Caroline’s Lady of the Bedchamber, and the bride spent her first formal dinner laying into her rival with sharp words.

Their actual wedding day proved to be just as disastrous. The couple wed on the evening of 8 April at the Chapel Royal, St James’s Palace with all the trimmings of a glorious royal wedding. King George III and Queen Charlotte led the guests while the Archbishop of Canterbury, John Moore, performed the ceremony.

The bride wore a dress of silver tissue and lace with a cape of velvet and ermine. She was attended by four bridesmaids – Lady Mary Osborne, Lady Charlotte Spencer, Lady Caroline Villiers and Lady Charlotte Legge. Opposite them were the titled groomsmen and the fashionably dressed Prince. And that’s where the glamour ended.

George was so drunk that he could barely stand up. At several points, he decided not to join in at all until his father told him to, and finally, the tears arrived. After the ceremony, everyone headed to a rather awkward reception at the Queen’s Apartments at St James’s Palace where George was far from the life and soul of the party.

As was only to be expected, both George and Charlotte were far from shy about sharing details of their wedding night. The bride, who was rumoured to have had several relationships before leaving Germany, said her new husband spent the evening in the grate ”where he fell and I left him”. At some point in the following day, they did their duty for nine months later their only child, Princess Charlotte of Wales, was born.

She would be a first hand witness to their disastrous marriage. George and Caroline lived separate lives, barely containing their hatred for one another and fighting over their daughter in private and public. Even when Charlotte died in childbirth, in 1817, her parents couldn’t stop attacking each other. When George became king, he famously barred Caroline from his coronation, and she died just three weeks later.

It was a sad end to a sad story. George and Caroline had been placed on a path trodden by many princes and princesses before them, but their own determination and lack of caution meant that rather than becoming a marriage of convenience, their union was endlessly inconvenient. And it all began on that April night with the tears of a drunken groom.