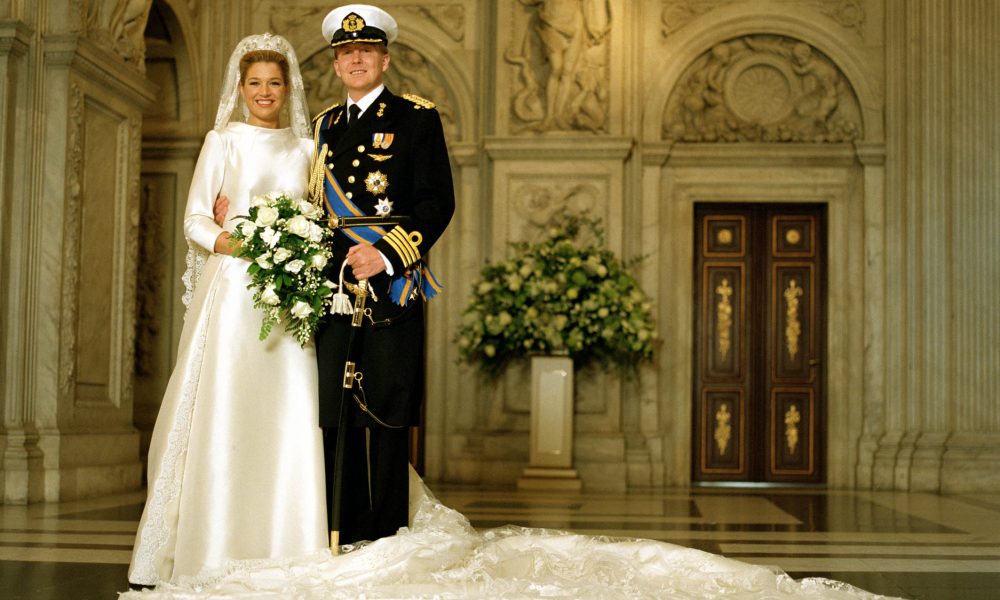 On 30 March 2001, Queen Beatrix announced the engagement of her son and heir, Prince Willem-Alexander to the Argentine-born investment banker Máxima Zorreguieta Cerruti. The couple were married on 2 February 2002.

To celebrate, let’s take a look back at Máxima’s stunning wedding ensemble: the opulent dress, the Dutch Pearl Button tiara (with star embellishments), and the hand-embroidered veil.

Queen Máxima turned to Italian designer Valentino to create her winter wedding dress. She and then-Queen Beatrix had been spotted visiting his atelier in Rome, prompting the Dutch press to speculate on the identity of her wedding dress designer.

“His wedding and evening clothes are super feminine, sexy, worldly, opulent, punky, but chic enough not to be nouveau riche,” de Volkskrant wrote about Valentino’s designs.

“If it [is indeed] Valentino, the Netherlands will finally have a real fairy tale princess. Even if it is only for one day,” they continued.

On 2 February 2002, Máxima arrived in a stunning wedding dress made of ivory Mikado silk for her civil wedding ceremony at Beurs van Berlage, where she and Willem-Alexander were married by the Mayor of Amsterdam; and again, at her religious ceremony later in the day at the Nieuwe Kerk.

The simple design consisted of a cowl neckline, three-quarter length sleeves, capped off by a five-metre-long train. The skirt of Máxima’s dress had been inset with panels of embroidered lace and flared out from the sides from an empire-line bodice.

Valentino has since designed the wedding dresses of Princess Madeleine of Sweden and Tatiana Santo Domingo, who married Andrea Casiraghi, eldest son of Princess Caroline of Monaco.

Máxima paired her Valentino dress with the Dutch Pearl Button Tiara, a tiara with a long history in the Dutch Royal Family – the base of the tiara reportedly dates back to Queen Sophie, wife of King Willem III, in the 1800s.

Five pearl buttons are routinely worn atop the diamond base, with Queen Juliana, Queen Beatrix and Princess Margriet all making regular use of the tiara – Queen Beatrix even wore this tiara on her investiture day in 1980.

When Máxima wore the tiara on her wedding day, she’d swapped out the five pearl buttons for five diamond stars traditionally used as brooches or hair ornaments. The diamond stars belonged to Queen Emma previously.

Máxima’s veil was made of point d’esprit silk tulle and hand-embroidered with flower and tendril motifs. Her bouquet consisted of white roses, gardenia, lily of the valley, and greens.

Her flower girls were Countess Leonie zu Waldburg-Zeil-Hohenems and Princess Pauline zu Sayn-Wittgenstein-Hohenstein, children of friends of the couple.

For what it’s worth, King Willem-Alexander wore the Captain of the Royal Netherlands Navy uniform and the following medals, ribbons or stars: