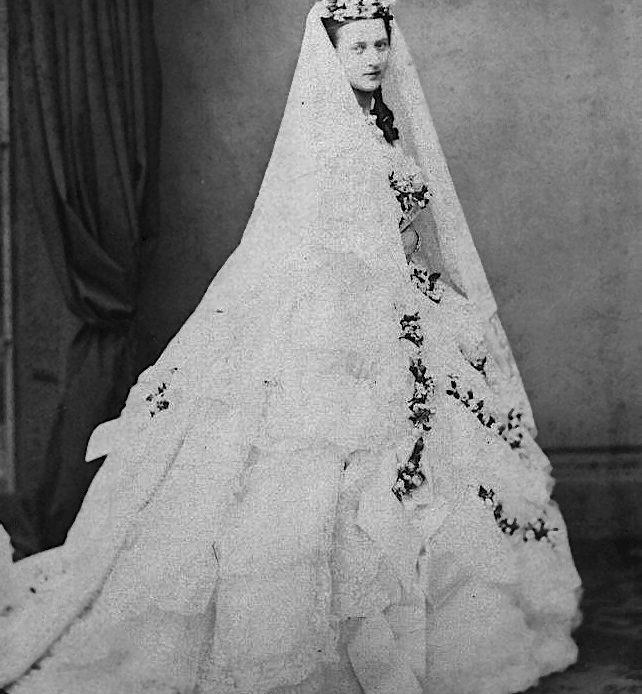 It was one of the most talked about weddings of the 19th century. All eyes were on a young, Danish princess called Alexandra as she walked into St. George’s Chapel, Windsor on March 10th 1863 to marry Albert Edward, Prince of Wales. Her groom was heir to Queen Victoria, her father first in line to the throne of Denmark. And so the gown chosen by the teenage bride had to fit the bill. And it did. Dramatic and demure in equal measure, the wedding outfit of Alexandra of Denmark helped turn her into a royal style icon.

The dress made history just by being worn. For Alexandra was the first British royal bride to be photographed in her wedding gown on the day of her marriage. And this was a ceremony for the history books. The wedding of an heir to the throne was always going to be a big deal. But Prince Albert Edward, Prince of Wales was also saying ‘I do’ in the strangest of circumstances. Since the death of his father, Prince Albert, in December 1861, his mother had plunged into an unbreakable sadness. Queen Victoria’s mourning was now synonymous with the very image of the Monarch herself. The future king would wed beneath the shadow of grief.

But behind that public image of widowhood, the canny PR mind of Victoria remained intact. She herself had used her wedding dress to try and boost the economies of some of the poorest parts of her realm and the bride of her heir was going to do exactly the same. Like Victoria, Alexandra chose a gown made of silk woven in the mean streets of Spitalfields in east London while the lace that decked the dress in epic quantities had been woven in Honiton in Devon where the local community relied heavily on the income of this cottage industry.

But the style was Alexandra’s alone. The girl who had learned to sew her own clothes in the chilly rooms of the Yellow Palace, the grace and favour home in Copenhagen where she’d grown up in relative royal poverty, had already developed a distinctive sense of style. She would become a fashion favoourite of the 19th century and her wedding dress made its own chic impact despite the day itself being dominated by gloom. Alexandra’s gown was worn off the shoulders with a fitted bodice and huge full length skirt, decked with four tiers of lace covered in orange blossom and myrtle. Her train, all 21 feet of it, was made of silver moire while her lace veil was held in place by more orange blossoms. And to underline her new role, as a future queen of Great Britain, the veil was covered with emblems of the four nations that made up the country including roses, shamrocks and thistles.

Just before she headed off on honeymoon with her new husband, Alexandra joined him and his mother for an official portrait to mark the occasion. It was in keeping with the mood of the day. The new Princess of Wales stood faithfully at the side of her mother-in-law who, dressed all in black, gazed up mournfully at a bust of Prince Albert. Her eldest son, the bridegroom, looked into the distance, ignoring the scene of misery laid out before him. But Alexandra, just eighteen years old, stared defiantly at the camera. Its her charisma that dominates her sad wedding portrait, a sign of the strength she would bring to a marriage that more than tested her patience.

All that was in the future on March 10th 1863 when the Danish princess became a British queen in waiting. Alexandra’s wedding dress remains a classic and a reminder, if we need one, that style, royal women and the impact that has on the very image of monarchy have been inseparable for longer than we sometimes care to remember.