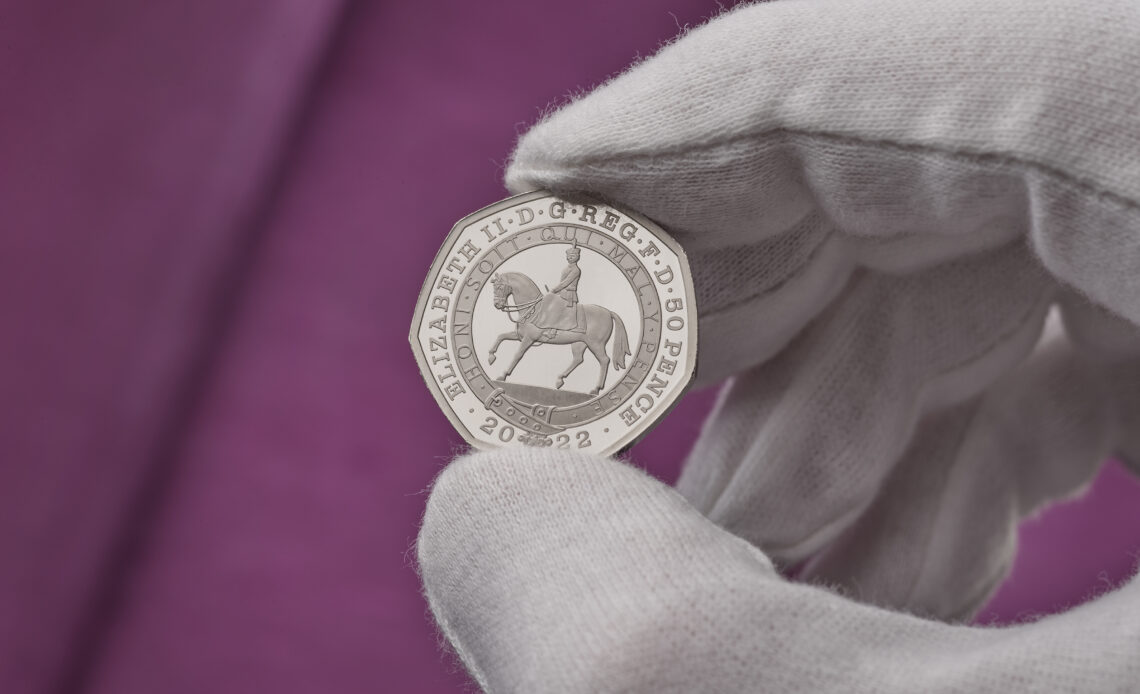 The new design, which shows The Queen on horseback, is the first collectable 50p coin marking a major royal event.

Created by John Bergdahl, the image was personally approved by Her Majesty.

It shows her on horseback, riding sidesaddle, as she did for so many years during Trooping the Colour. Around the image are the words from the motto of the Order of the Garter ”Honi Soit Qui Mal Y Pense”. Outside of that are the words found on many coins ”Elizabeth II D.G. Reg. F.D” meaning ”Elizabeth II, by the Grace of God, Queen, Defender of the Faith”.

On the other side of the coin is the Royal Mint’s special design for the Platinum Jubilee, based around the number 70. Inside the zero of the 70 is The Queen’s cipher and the date of her reign so far.

The Royal Mint is giving 7,000 of the coins to school children across the UK who are taking part in the special Jubilee edition of The Queen’s Green Canopy RFS Junior Forester Award.

Clare Maclennan, the Royal Mint’s Divisional Director of Commemorative Coins, said ”“The Platinum Jubilee is an historic occasion and one that is particularly special for The Royal Mint, as the original maker of British Coins for 1,100 years. “In celebration of this landmark event, the official Platinum Jubilee collection, including the new 50p and traditional £5 crown, features a unique commemorative design on both sides of the coin.”

Royal Mint Museum historian, Chris Barker, said the new 50p had a special place in history, adding ”“The Queen’s legacy on coins stretches the length of her momentous reign, with The Royal Mint striking five definitive portraits of Her Majesty on official UK coin and celebrating previous Jubilees.”

The new 50p was launched on January 6th 2022, exactly a month before The Queen reaches the 70th anniversary of her reign.

It’s available to buy as an uncirculated edition for £7 on the Royal Mint website.