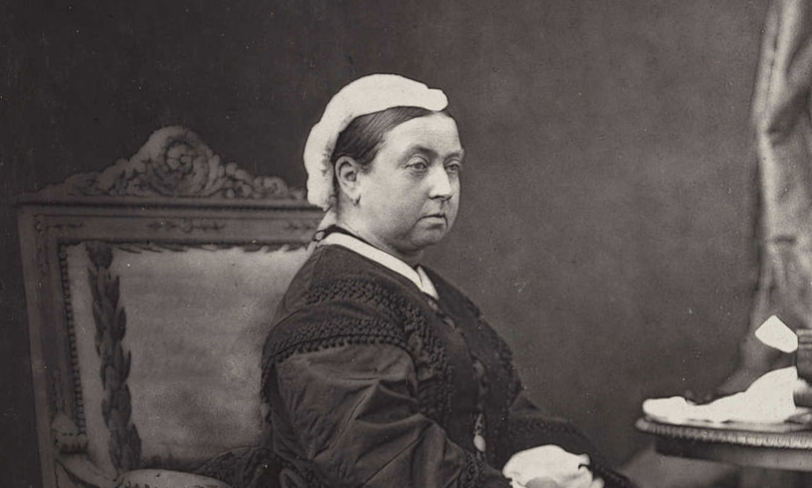 Sometimes known as ‘the annexe to Buckingham Palace’, the classic hotel in London’s Mayfair has time-honoured connections with royalty that exist into the present day. From the earlier single building run by William and Marianne Claridge at 51 Brook Street, Claridge’s opened in its own right in 1856 and received its first visit from Queen Victoria in 1860. Historically, it continued to host visiting royalty and famously became the birthplace of Alexander, Crown Prince of Yugoslavia who was born in 1945 in Suite 212, as the son of King Peter II and Queen Alexandra of Yugoslavia, when the Royal Family were living in English exile at Claridge’s.

Whilst Queen Victoria never herself stayed at Claridge’s, she visited the hotel between 1860 and 1877. I want to examine the Queen’s recorded visits to Claridge’s such as survive in her journal and explore how even today, delicate references to her survive in the décor of one of the signature suites.

During Queen Victoria’s long reign Claridge’s accommodated foreign royalty whom the Queen did not visit at the hotel itself but received elsewhere. One of these was Empress Elisabeth of Austria, whose legendary beauty aroused Queen Victoria’s curiosity we should also imagine, as a fellow Empress (since 1876).

Elisabeth’s niece Marie, Countess Larisch von Moennich – whose self-defensive memoirs My Past (1913) are of questionable reliability and written down much later – describes staying at Claridge’s in 1876 when the Empress was in England. Elisabeth paid a visit to Queen Victoria at Windsor in March. Of this meeting, Queen Victoria wrote in her journal that the Empress arrived on a Sunday after chapel during a snowstorm and was received in the Tapestry Room at Windsor Castle. As we might expect, Queen Victoria took a feminine interest in the Empress’s legendary appearance, noting that she wore black trimmed with fur. Countess Larisch wrote in her memoirs of the visit (at which she was present and introduced to the Queen): ‘I remember thinking what a contrast the two ladies presented. Elizabeth wore a dark blue velvet gown trimmed with fur, a creation from the Rue de la Paix, and her hat was an exquisite affair laden with softly gleaming iridescent feathers. Queen Victoria was short and somewhat thick-set, and she wore a voluminous black silk dress, partly hidden by an aggressive Indian shawl. An enormous white widow’s cap surmounted her head…’

Of the hotel, the Countess wrote: ‘We stayed at Claridge’s, which was then a dark, uncomfortable place, and not, what it is now [1913], a hotel where the spotless, beautiful rooms are a delight to see… When we arrived we found the King and Queen of Naples [Queen Marie of Naples, sister of Empress Elisabeth] there… She [the Empress] returned with us to Claridge’s, where a large suite of rooms had been reserved for her…’ (Countess Marie Larisch, My Past, pp. 96-7).

We know that Empress Elisabeth of Austria stayed at Claridge’s at least one further time from a little-known diary entry of her favourite daughter, Archduchess Marie Valerie, who accompanied her. The Empress used one of her lesser titles, the Countess of Hohenembs as her incognito under which to travel. Whilst the diary of the Archduchess remains in a private archive still inaccessible to historians, sections of it have been published from the manuscript in Munich’s Bavarian State Archives of historian and archivist Richard Sexau, which transcribes some of the original text.

The young Archduchess made a trip to England with the Empress in 1888 and took her diary with her. The first diary entry headed from Claridge’s is for March 1888; the London visit may have lasted into April. On 10 April, the Archduchess wrote in her diary: ‘Bournemouth… View of the sea… white cliffs surmounted by dark forests of fir-trees. Mama felt so unhappy in London but didn’t want to leave before I had seen everything…’ The Empress visited England several times in the 1880s ostensibly for sea-bathing once she had given up hunting, which could explain why the Archduchess wrote her later entry at Bournemouth (Brigitte Hamann, The Reluctant Empress, 245).

The Empress had been to London before. On her visit in 1874, she rode in Hyde Park, visited the waxworks at Madame Tussauds and called on the Duke and Duchess of Teck (Ibid, 219). In Valerie’s diary are numerous descriptions of the galleries and sights of London, including a visit to the waxwork museum Madame Tussauds, where the young Archduchess was horrified to see a waxwork of her mother, the Empress ‘with the Golden Fleece on her arm – GHASTLY – but even more dreadful was Papa [Emperor Franz Josef I] in the uniform of a Hungarian general, we’d like to have destroyed this shocking caricature…’ Presumably, Elisabeth wanted her daughter to visit the waxworks as she had done in 1874. Valerie’s entry for Claridge’s, I translate from the German edition of the diary: ’17 March, London, Claridges Hotel….’ (ed. Martha Schad, Marie Valerie von Österreich, Das Tagebuch der Lieblingstochter von Kaiserin Elisabeth, 141).

Queen Victoria’s first visit to Claridge’s took place on 12 June 1860. She drove the short distance from Buckingham Palace to Mayfair, in order to visit Louise, Princess Frederick of the Netherlands (1808-70) who was staying in London at the time. Queen Victoria may have remembered that Prince Albert had acquired a photograph of Louise for the collection, taken the year before. The Queen recorded in her journal in November that year that Eugenie, Empress of the French, had arrived at Claridge’s and was staying there incognito, accompanied by only a small suite of two ladies and two gentlemen. On 10 December, Queen Victoria visited the Empress Eugenie once more at Claridge’s, driving from Windsor Castle with her second daughter Princess Alice, Alice’s fiancé Prince Ludwig (‘Louis’) of Hesse and her second son, Prince Alfred. The visit lasted about half an hour and the Empress Eugenie received them herself at the door of the hotel.

Today, the Empress Eugenie Suite at Claridge’s recalls the visits of the Empress of the French to the hotel, who resided in her ‘winter quarters’ at Claridge’s. The embroidered headboards in the suite use the orange blossom motif as a touching reference to Queen Victoria. The Queen loved the blossom and wore it in her simple wedding wreath; she also used perfume of orange flowers and even had her own orange flower jewellery, designed by Prince Albert. The glass and gold leaf chandelier in the Empress Eugenie Suite inspired by ‘a beloved pendant of Queen Victoria’, may refer to the heart-shaped locket on a gold chain which contained the Prince’s hair, which Victoria wore ‘day and night’ before her wedding and which she wears for example, in the famous ‘erotic’ portrait of her with loosened hair by Franz Xaver Winterhalter from 1843.

Queen Victoria’s penultimate and final visit to Claridge’s contain interesting information about the suite in which Eugenie, Empress of the French and Queen Sophie of the Netherlands had stayed. Visiting the Emperor and Empress of Brazil, it seems they occupied the same one suite of rooms because the Queen recognised them from before. The Emperor and Empress returned again in June 1877 and Queen Victoria visited them, having driven to Claridge’s from St James’s Palace before returning to Windsor. The ‘Emperor and Empress’ refers to Pedro II (‘the Magnanimous’) and Teresa Cristina, Empress Consort of Brazil and Princess of the Two Sicilies.

Whilst it was the last time that Queen Victoria visited Claridge’s, the royal connections live on.