Prince Napoleon’s journey to Norway in 1856

In August 1856, Christiania received an exceptionally grand visit. Seven royals from three royal houses, one Imperial house and a princely house were gathered in Norway’s capital that summer. One of them was Napoleon, although it wasn’t the Napoleon most of us think of.

Christiania had, since the spring of 1856, had been a permanent royal home.  It was Crown Prince Karl of Sweden-Norway, his wife and their daughter who came to live there. Crown Prince Karl was proclaimed Vice-King of Norway by his father as a means of de-escalating the conflict`s between Norway and Sweden in the Union. One of the first thing the Vice-King did was to embark on a journey to get to know his kingdom in the summer of 1856. In addition, his father-in-law was on the journey, Prince Frederik of the Netherlands.

On August 30, the journey was completed and Karl returned to the capital. The next day, August 31, a ship arrived which transported Prince Napoleon of France. It had been announced in May that Prince Napoleon would visit the Nordic nations, but the exact times were still unknown. Only a few weeks before, in mid-August, the prince’s arrival was announced. The vice king altered his original timetable so that he could meet Napoleon.

Napoleon Joseph Charles Paul Bonaparte was 34 years old during his Norwegian visit. He was the son of Jérôme Bonaparte who in his time was king of Westphalia. Prince Napoleon was Emperor Napoleon I`s nephew. Prince Napoleon had during his childhood been given the name of Plon-Plon by his mother, and this still remained with the family. So when some Norwegians asked who came to visit, Crown Prince Karl answered very seriously that it was Plon-Plon, without this being further clarified for those who asked.

Napoleon was on a longer journey through the Nordic countries and had even visited Iceland before coming to Norway. Napoleon wanted to establish political contacts with royalty in Sweden-Norway and Denmark, and he also brought along some scientists who were to bring new knowledge about the Nordic countries back to France.

Napoleon’s expedition consisted of four ships and the prince himself sailed with the ship Hortense, named after Emperor Napoleon’s adoptive daughter. Napoleon’s four ships were greeted with a 21 gun salute as they arrived at the inner part of the Oslo Fjord, accompanied by a Norwegian warship. When the prince came ashore, the French flag was hoisted and the welcoming committee consisted of Count Adam Johan Frederik Poulsen Trampe who was a chamberlain at the Norwegian-Swedish Vice-king’s court.

First there was lunch at Bygdøy Konggård before the prince got a guided tour of the city streets, the newly built castle and the fortress. The tour went on foot and the newspapers emphasized that the prince was civilly dressed and took the time to talk to several of the city’s citizens. Prince Napoleon hosted a dinner on his ship in the afternoon while it toured the shore of Bygdøy and gave a great view while the meal was served.

On the second day of the visit, there was a smaller ball with only prominent guests. Here, Prince Napoleon and Vice-King Karl started a longer conversation about Iceland. Karl himself had never visited the island. Napoleon could then tell his Norwegian-Swedish colleague that the island was spectacular and that if the future allowed him he wanted to visit it again. Napoleon told him he had wanted to see Jan Mayen as well, on his journey to Iceland. However, he had to give up this because of bad weather and missing maps of the area. 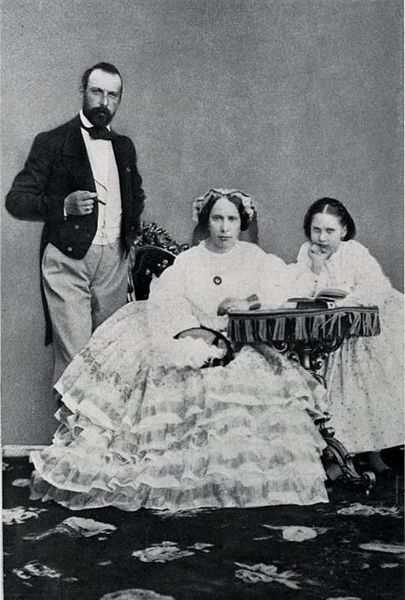 On the third day of the visit, another ball entertained the guests. This time it was much bigger and with far more guests. In fact, the newspaper Aftenbladet claimed that all the city’s trading families were invited, as well as most of politicians and other rich women and men. There was Count Trampe who had arranged the celebration and Napoleon liked the ball so well that Trampe was given two great oil paintings as a gift. The motif was of course Napoleon I and Empress Josefine. During these festivities, Prince Napoleon also received the grand cross of the Royal Norwegian St. Olav’s Oder.

Shortly after Napoleon’s arrival, two more royal guests had came to the capital. This was Prince Albrecht of Prussia and Prince Kraft of the Hohenlohe-Ingelfingen. Prince Albrecht was the son and brother of Prussian kings. This made him Crown Princess Louise of Sweden-Norway`s uncle, brother of the Crown Princess’s mother. Prince Kraft of the Hohenlohe Ingelfingen was not a relative of any of the other royals but a prominent commander of one of Germany’s many high-noble families.

The Royal Paléet in Oslo, photographed in 1890. Photo: Oslo museum via Wikimedia Commons.

The Royal Place in Oslo was not used during the visit, for unclear reasons. Although the city now housed the Vice-King, his wife the Crown Princess, their daughter Princess Louise, and three foreign princes, they all stayed in regal residences in downtown Christiania. One of the days, a mini-parade was held in honour of Napoleon by four companies with hunting forces at Akershus Fortress.

How long Prince Albrecht stayed in Norway is uncertain. However, Napoleon was in the capital for a week before turning south. The Vice-King went together with his French colleague. Karl was there when Napoleon made a short stop in Kongsberg to see the silver mines, but from here, the trip went through Gothenburg to Copenhagen to meet King Frederik VII of Denmark. After a brief visit here, the French prince turned to Stockholm and Crown Prince Karl returned to Norway.

Prince Napoleon travelled over the Gøta Canal to Sweden’s capital to meet King Oscar I. Napoleon’s journey has been the basis of Charles-Edmond Chojecki’s travel description. It was published in French the year after the journey was over in 1857.