Who is Infanta Cristina of Spain? 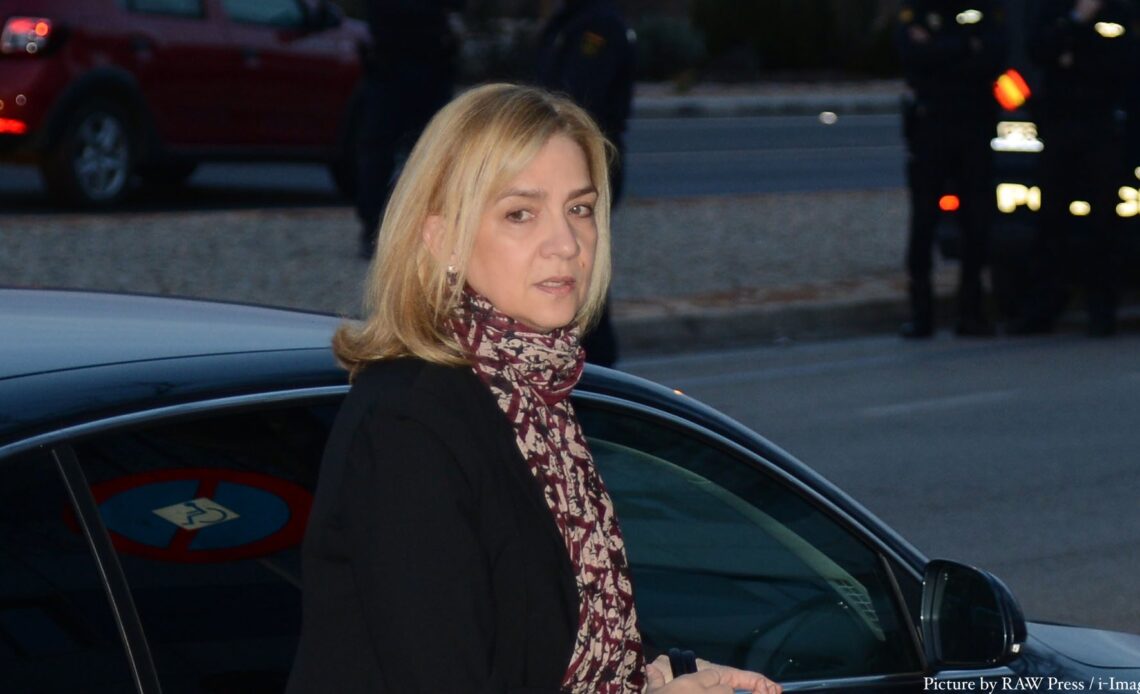 The Infanta is the second child and younger daughter of Juan Carlos and Sofía; her older sister is Infanta Elena, and her younger brother is King Felipe VI. While she was born into the Spanish Royal Family, she is also very closely related to the Greek Royal Family. Her mother was born as Princess Sophia of Greece and Denmark as the daughter of the King of Greece. Cristina’s maternal uncle, Constantine, was the last King of Greece.

She was christened into the Roman Catholic Church on 20 June as a newborn by the Archbishop of Madrid. Selected to be godparents were her great-aunt Infanta Maria Cristina and cousin Alfonso, Duke of Anjou and Cádiz.

Cristina’s education took place at the Santa María del Camino School and later the Universidad Complutense de Madrid; she graduated from the latter in 1989 with a degree in political science. The royal then studied at New York University where she received her master’s degree in international relations the following year. Aside from her native Spanish, she speaks her mother’s native Greek, English, French and Catalan fluently.

She began working for the La Caixa Foundation in 1993 while in Barcelona and saw several promotions over the years. By 2009, she and her family relocated to Washington D.C. where the Infanta served as the foundation’s Director of the International Department.

In her youth, the Infanta, like other members of her family, was a keen athlete and Olympian. She was on the sailing team representing Spain at the 1988 Summer Olympic Games in Seoul, South Korea, and was given the honour of carrying the Spanish flag for the opening ceremony. Cristina travelled to Atlanta, Georgia, USA, for the 1996 Summer Olympic Games to cheer on the Spanish competitors, as well.

The Atlanta Summer Olympics would change her life. There, she met Spanish handball Olympian Iñaki Urdangarin. Iñaki would play on one of the most successful teams in Spanish handball and achieve the bronze medal in the Atlanta Olympic Games (and later in Sydney in 2000, as well). They met during a celebration of the bronze medal, where Cristina was reported to have asked, “Who is that blonde?” Friends of Iñaki have said that he was a bit of a playboy, but everything changed after he met Cristina. They started dating after they returned to Barcelona and were able to keep it quiet for a time due to the discretion of their close friends.

In December of 2014, the High Court of the Balearic Islands announced that she and her husband, Iñaki Urdangarin would be put on trial for corruption.

Cristina and Iñaki were accused of defrauding taxpayers of funds through embezzlement and money laundering in excess of £4.5 million through the non-profit organisation the Noos Institute. Infanta Cristina had been a member of the board, while her husband was the director.

Specifically, Cristina was accused of using money from the organisation for personal expenses. Iñaki was arraigned on charges of tax fraud and money laundering. He, and his business partner Diego Torres, were accused of hugely overcharging two regional governments (The Balearic Islands and Valencia) that participated in different sporting events organised by the Noos Institute. Formal charges against him were brought in December 2011. However, charges were not brought against the Infanta until Spanish judge Jose Castro formalised the charges in June 2014. Fifteen other people besides Infanta Cristina and Iñaki were indicted in the case, as well.

The trial began in January of 2016 with the Spanish royal arguing that she knew nothing of her husband’s actions and denying the accusations that she was an accessory to tax evasion.

As a result, Cristina’s younger brother, King Felipe revoked their titles as the Duke and Duchess of Palma de Mallorca. Her title is now just Her Royal Highness the Infanta Doña Cristina of Spain. However, her place, and her children’s place, in the line of succession was not changed. The abdication of her father, King Juan Carlos, was also attributed to this scandal. The popularity of the Spanish Royal Family also took a nosedive, as a result. In 2013, El País, a Spanish newspaper, reported their approval rating was at 3.68 out of 10.

The Infanta was acquitted of corruption – after being the first member of the Spanish Royal Family to stand trial – in February 2017; Cristina was fined 265,000 euros for civil liability by the court and later had that sum cut in half by the higher courts. However, Iñaki was convicted, and Spain’s Supreme Court upheld the lower court’s ruling upon appeal. He will serve five years and eight months behind bars.

Since the controversy and trial, Infanta Cristina has remained primarily out of the limelight. She has, on occasion, attended events alongside the Royal Family, but these events were for the memorial Mass for her late grandfather, a private birthday celebration for her mother’s 80th birthday, and the funeral for her paternal aunt, Infanta Pilar.

The Infanta and her children reside in Geneva, Switzerland.