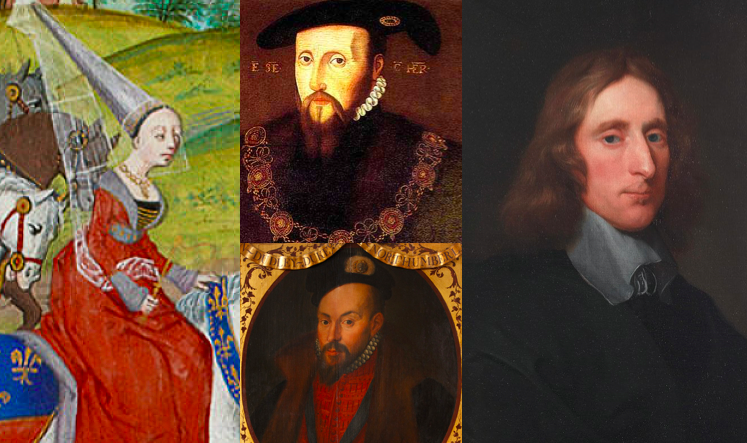 Sometimes we gloss over the men and women who were in the background, making decisions and participating in some rather wicked behaviour. The following are just a few who made the cut of those who behaved poorly in English history.

First in the queue is Queen Isabella of France and Roger Mortimer. The Queen, often referred to as the She-Wold of France, joined forces with Mortimer and became known as a rather foul duo. For many years, they sought to remove King Edward II from the throne. Isabella, wife of Edward II and her lover, Roger Mortimer finally did the wicked deed in 1327. But better the devil you know – they ruled just as poorly as Edward II. Their worst failing was deciding to recognise Robert the Bruce as King of Scotland, as Isabella was far more concerned with regaining areas of France than retaining the rule of Scotland.

At the time, King Edward III was a minor, so there was not much he could do. When Edward III turned 18 in 1330, he decided to take matters into his own hands. Edward had Mortimer arrested and tried for treason in Parliament. Once convicted, Mortimer was hanged, drawn, and quartered, despite the protestations of Queen Isabella. The Queen was fortunate and spared her life. Edward had her withdraw from public life, and she remained in seclusion until she died in 1358.

Our next bad lad is Edward Seymour, Duke of Somerset. The Duke let power go to his head, something he subsequently lost, literally! The will of King Henry VIII called for a council to rule in his son’s name after Henry’s death. Seymour, as Earl of Hertford, was on the council. The will also allowed Seymour to style himself as the Duke of Somerset. As the council began, the Duke wasted no time in taking over the leadership of the council and subsequently naming himself Lord Protector.

The Duke demanded the council to act on his orders and ruled as if he were King. He would not allow the young King to know what was transpiring in court. Somerset although had worse problems. Firstly, his brother Thomas was a cause of trepidation. Thomas Seymour married King Henry VIII’s widow Catherine Parr and began making advances on Princess Elizabeth, who was in her care. After the death of his wife, Thomas Seymour wanted to marry Elizabeth. The notion of this marriage did not bode well with the council and Thomas was arrested.

Since they were not able to convict him of treason, he was executed after an act of attainder had been delivered. Next in the queue of The Duke’s growing list of problems was a rebellion that had broken out against his maladroit rule. After trying to gain the protection of the King, the Duke was arrested and tossed off the council.

Replaced by John Dudley, Earl of Warwick, and soon to be Duke of Northumberland, The Duke later became reinstated to the council but was arrested for trying to form a coup to overthrow Northumberland. The executed The Duke of Somerset in 1552.

In 1553, word was the young king was dying. Knowing that his Catholic half-sister Mary was next in line, Edward, with the support of the Duke of Northumberland, altered his will. The Duke had succeeded to get his son Guilford married to Lady Jane Grey, a cousin of the King and a descendant of King Henry VII. Edward then named Jane as his heir. This move not only cut Mary from the line of succession but also his other half-sister Elizabeth. Edward died on July 6, 1553. For the next nine days, the Duke sought to find support for Jane and to bar Mary from the throne. He was dreadfully ineffective. Mary gathered her supporters, marched to London and had the Duke of Northumberland, Lady Jane Grey, and her husband Guilford seized and sent off to the Tower and convicted of treason.

They executed the Duke of Northumberland in August, sparing Lady Jane Grey and Guilford the axe. They were, however, executed in 1554 after a later rebellion, which tried to reinstate them to the throne failed.

Our final bad lad is Richard Cromwell, Second Lord Protector of the Commonwealth of England, Scotland and Ireland. Richard Cromwell was the son of the preceding Lord Protector, Oliver Cromwell. Oliver had originally been a MP in the House of Commons in 1628. Cromwell was back in the Commons in 1640 when Charles recalled Parliament (King Charles I dissolved Parliament for 12 years). He played an active role in Parliament’s draughting up an army against Charles leading up to the English Civil War. Throughout the war, Cromwell became one of the most dominant Parliamentarians. He was one of the key people to overthrow the King, which ended the monarchy.

As years passed of little being accomplished under the Commonwealth, Parliament selected Cromwell to hold the position of Lord Protector. Though not an inherited position, Cromwell designated his son Richard to take over after upon his death. In 1658, Oliver died, and Richard grabbed the reigns. Unlike his father, Richard had no military experience whatsoever. The Army had great influence under the Protectorate, and they were not too ecstatic with the young Cromwell ruling over them. Various factions began to develop which the new Lord Protector could not gain control. In 1659, Parliament was called, and Richard Cromwell turned in a letter of resignation.

Parliament re-established the 1653 dissolved Commonwealth. The objective was to reinstate the monarchy under King Charles II, which finally transpired in 1660. Cromwell went willingly into exile, returning to England where he remained until his death in 1712.