Burnt down Brazilian imperial palace to be rebuilt

The Brazilian Imperial Palace in Rio de Janeiro which burnt down last year is to be rebuilt, with the first stage of construction already beginning. The Palace of Saint Christopher, also called Palácio Imperial de São Cristóvão, served as residence to the Portuguese Royal Family and later to the Brazilian Imperial Family until 1889, when the country became a republic through a coup d’état deposing Emperor Pedro II.

Since the deposing of the imperial family in 1889, the Palace has been used as the national museum of Brazil. It was on 2 September 2018 that the palace was completely destroyed by a major fire. Although some items were saved, it is believed that 92.5 % of its archive of 20 million items were destroyed in the fire, though circa 1.5 million items are stored in a separate building, which was not damaged.

The burning imperial Palace of Saint Christopher in the background, her together with the statue of Brazil`s last Emperor, Pedro II. Photo: Felipe Milanez via Wikimedia Commons.

Efforts to restore Brazil’s National Museum are still underway five months after it was engulfed in a devastating fire. The Brazilian government gave journalists a tour through the ruins in Rio de Janeiro in February. Local construction workers used scaffolds to reinforce the main areas of the museum for the safety of staff and reporters.

According to the vice-director of the National Museum, Luiz Duarte, the institution had suffered from years of neglect under numerous governments. “We never got anything from the federal government. We recently finalised an agreement with the state-run development bank BNDES for massive investment, so that we could finally restore the palace, and, ironically, we had planned on a new fire prevention system,” said Luiz Duarte to Globo TV following the fire. 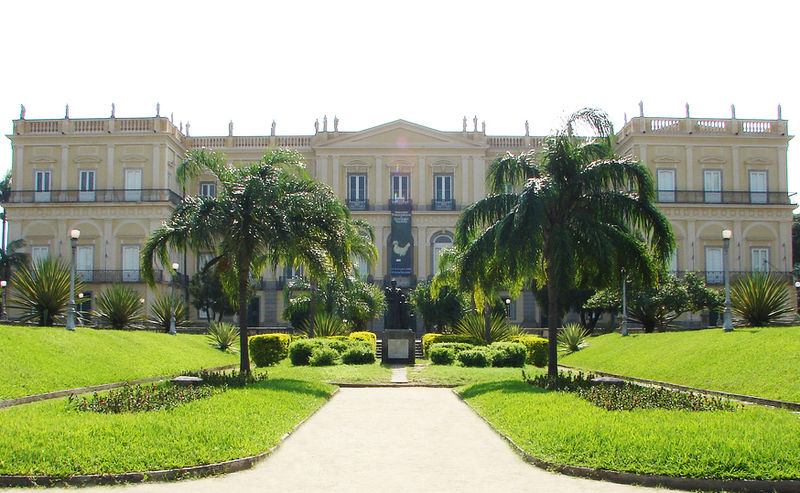 The Imperial Palace of Saint Christopher before the fire in 2018. Photo: Paço de São Cristóvão via Wikimedia Commons.

The interior of the museum is still in ruins, but restoration work has begun on cultural relics. Some pieces survived the fire, including the famous Bendegó meteorite and a library of 500,000 books, including works dating back to the days of the Portuguese empire and royal family.

The rebuilding of the collection and the museum has received international help. Among the many donors, the German Foreign Ministry has offered € 1 million in aid to rebuild the museum.