Air kisses from a Queen as Denmark’s Royals open Parliament 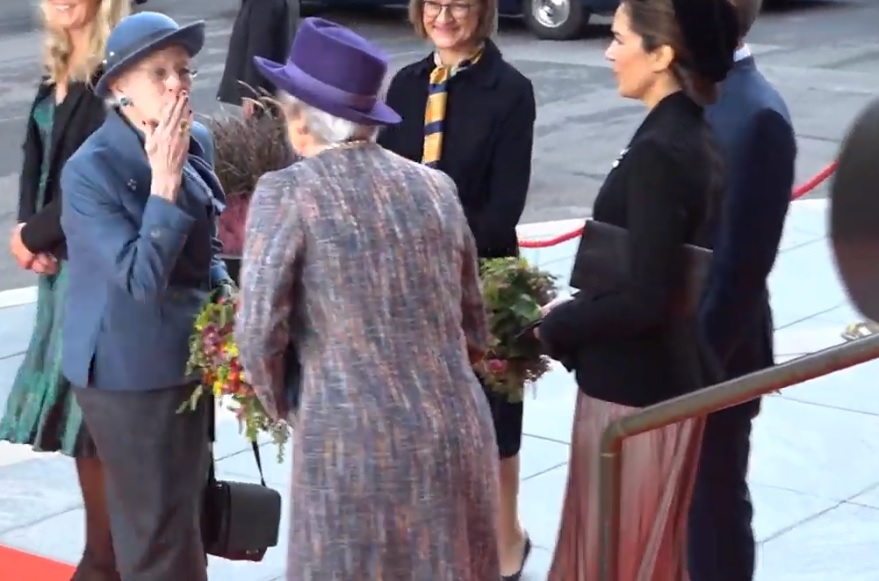 Queen Margrethe of Denmark together with her son Crown Princess Frederik, her daughter-in-law, Crown Princess Mary and sister Princess Benedikte of Denmark and Sayn-Witgenstein-Berleburg attended the solemn opening of the Danish parliament, the Folketinget, on October 6th 2020. There have been enormous changes in our lives due to coronavirus and this, naturally, also applies to the opening of the Folketing. And even though they are the same family, the royals need to be careful when greeting each other.

Normally there are kisses and hugs when the royal members greet each other, but when Queen Margrethe arrived at the opening of the Folketing, she greeted her sister, son and daughter-in-law in a brand new way. Queen Margrethe went up the outer stairs of the Folketing with a smile, where the family received her, and when she got close to them, of course at a proper distance, she sent three air kisses away towards her beloved family.

When the royal family arrived at the opening of the Folketing it was without Prince Joachim and Princess Marie. The prince and princess usually attend, but since they moved to Paris last September, they naturally have their everyday life and work to look after in France. Last year, Prince Joachim and Princess Marie did not attend either. Then it was because of Prince Joachim’s military training in Paris, which he has now completed. Now, he works as a Defence Attaché at the Danish Embassy in Paris.

The Danish Royal Family has a passive role in the annual ceremony,  in opposition to the royal families of Sweden, Norway or the United Kingdom. Queen Margrethe does not make a speech during the opening, but she is present as a symbol during the first session. Before the ceremony, the government and the members of parliament attend a service that is not attended by the Royal Family. There is no parliamentary debate during the first session, but the Prime Minister makes a speech in front of the members of the parliament.

Queen Margrethe first attended the Opening of Parliament in 1958 when she turned 18. Crown Prince Frederik and Prince Joachim also first attended after their 18th birthdays.