The other Queen celebrating a jubilee in 2022 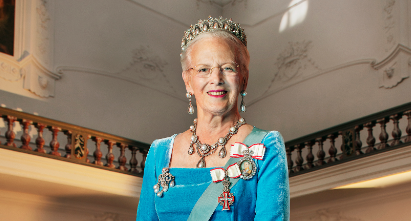 The Queen’s Platinum Jubilee has been fêted as a much-welcomed four-day celebration coming to the United Kingdom in 2022, and while her 70th anniversary on the throne is a huge milestone, she won’t be the only monarch with a special jubilee that year.

Queen Margrethe, the popular monarch of Denmark, will mark her Golden Jubilee, 50 years on the throne, on 14 January. Queen Margrethe came to the throne in January 1972 following the death of her father, King Frederick IX, after a short illness.

The succession to the Danish throne had previously been male only, however, when Frederick IX and his wife, Queen Ingrid, had only daughters, the constitution was amended in 1953 to allow for female succession barring the absence of a male heir.

The king and his family were extremely popular in Denmark, so the change was welcomed. In 2009, the Act of Succession was amended further to allow for absolute primogeniture, meaning that the firstborn child of the monarch, regardless of gender, will inherit the Danish throne.

Queen Margrethe’s succession was a relatively low-key affair, without a formal coronation ceremony like Queen Elizabeth II enjoyed in 1953. She appeared on the balcony of Christiansborg Palace with the Prime Minister who proclaimed her Queen of Denmark three times; then traveled back to Amalienborg for another balcony appearance with her family to greet the cheering crowds.

Queen Margrethe celebrated her Silver Jubilee in 1997 with a religious service, a gala dinner and a balcony appearance; and a limited foreign guest list that only included fellow Scandinavian royals.

Her Ruby Jubilee, marking 40 years on the throne, was celebrated in January 2012 with much greater fanfare. In addition to the balcony appearance, church service and gala dinner, Queen Margrethe also enjoyed a concert and several television interviews to mark the occasion. Again, her fellow Scandinavian royals attended the festivities.

At a press conference the night before her jubilee, Queen Margrethe squashed rumours that she may consider abdicating in the future, saying, “In my eyes, it’s part of the position that you have when you inherit a monarchy: It is a task you have handed down to you, and that you keep as long as you live, the way my father did and my grandfather before him.”

Queen Margrethe was due to celebrate her 80th birthday this past April in grand style, however the coronavirus pandemic curtailed most events. European royals, including her children, filmed video messages with birthday greetings for her; and Danes were encouraged to sing ‘Happy Birthday’ to the Queen from their balconies.

“Denmark and the world community are in a very difficult situation right now. We all have a special responsibility to pay attention to each other and together contribute to Denmark getting through the very big challenges facing the country. I therefore appeal that we all follow the directions of the government and the authorities and look out for each other,” Queen Margrethe said after her birthday events were cancelled.

“I would like to extend a heartfelt thank you to the Danish healthcare staff and to the authorities, institutions, companies and individuals who show great vigour and care for the Danish population, so that together we can get through this difficult time.”

There have been no formal announcements of events to coincide with Queen Margrethe’s Golden Jubilee yet, like there has been for Queen Elizabeth II.