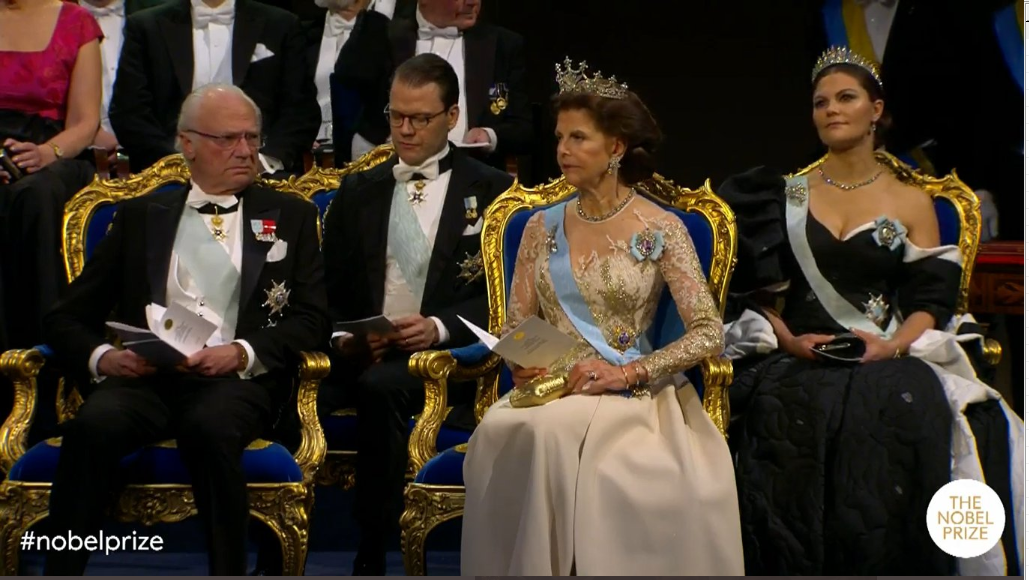 As each year on the 10th of December, the Swedish Royal Family attended the Nobel Prize Ceremony at the Concert Hall of Stockholm to honour the Laureates. During the ceremony, King Carl XVI Gustaf handed out 14 Nobel Prizes in five categories.

King Carl XVI Gustaf and Queen Silvia were joined by Crown Princess Victoria and Prince Daniel as they stepped out on the stage of the Concert Hall in Stockholm at 4.30 pm sharp. At the same time, Prince Carl Philip, Princess Sofia and Princess Madeleine found their seats at the front row. After their ceremonial entrance, the Swedish Royal anthem, Kungssången was sung. Then, they were joined by the Nobel Laureates. Other guests included family members of the Laureates, members of the Nobel Committees, politicians, ambassadors, members of the Royal Household and so on.

His Majesty the King had, as each year, the honour to hand out the Nobel Prizes to each Laureate after they are honoured in a speech by a member of the Nobel Committee. King Carl XVI Gustaf presented Professors Peebles, Mayor and Queloz with the Nobel Prize in Physics. Then, the Nobel Laureates in Chemistry, Professors Goodenough, Whittingham and Yoshino, in Physiology/Medicine, Professors Kaelin, Ratcliffe and Semenza, in Literature, Olga Tokarczuk and Peter Handke and in Economics, Professors Banerjee, Duflo and Kremer were awarded their Nobel Prizes. The Nobel Peace Prize has also been awarded today but not by King Carl XVI Gustaf. Each year a separate ceremony is held in Norway.

Even though the importance of the Nobel Prizes cannot be denied, fashion lovers also see the event as the excuse to dress up extensively. The Swedish Royal Family brought out special gowns, tiaras, jewellery and a lot of diamonds. UFO No More and other fashion blogs have provided information on the clothing choices. Her Majesty Queen Silvia (re)wore an Elie Saab gown and paired it with Queen Sofia’s Diamond Tiara. Her daughter, Crown Princess Victoria wore an impressive black and white gown by the Swedish-Eritrean designer Selam Fessahaye and combined it with one of her favourite tiaras, the Baden Fringe. Also, her sister-in-law, Princess Sofia opted for a Swedish designer as she wore a bright blue dress by Emelie Janrell. Her wedding tiara was adapted to match her dress. Last but not least, Princess Madeleine of Sweden stepped out in a bright pink dress by Angel Sanchez. She paired it with the Aquamarine Kokoshnik tiara out of the collection of the Royal Family. All members of the Swedish Royal Family also wore the blue sash and star of the Order of the Seraphim.

In the evening, the Nobel Banquet was held at the City Hall of Stockholm. The guests of honour made their way down the stairs, and then dinner was served. 1,350 guests including the Royal Family, the Nobel Laureates and their families, politicians, ambassadors, students and more attended the dinner. This year, the food was prepared by Sebastian Gibrand and Daniel Roos. To entertain the guests, several divertissements were organised. The dinner ended with a dance in the Golden Hall.