Taking a look at Stockholm Palace 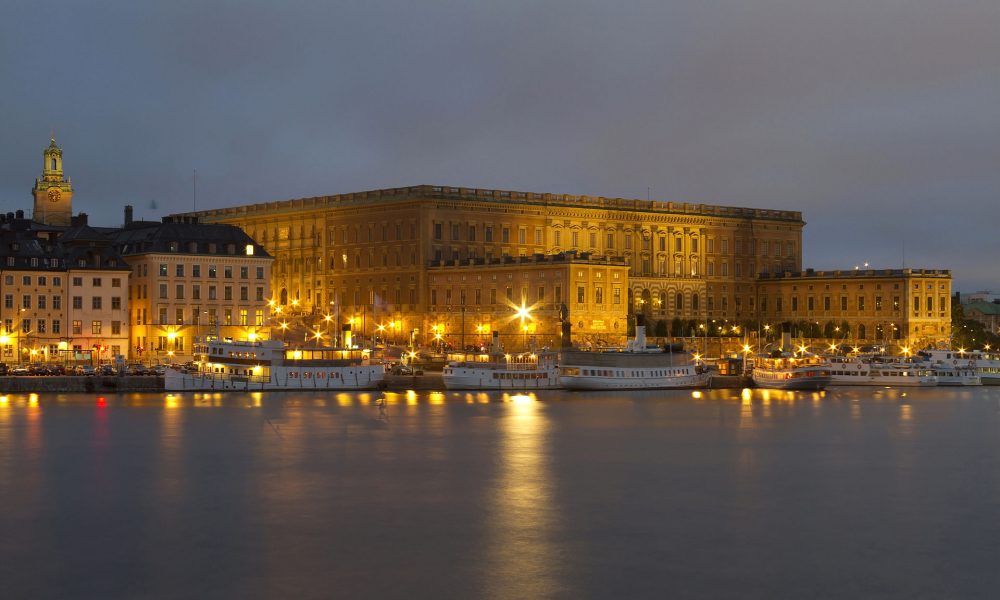 Sitting on the water in the Swedish capital of Stockholm is Stockholm Palace, commonly referred to just as The Royal Palace; it is the official residence and location of the offices of the His Majesty King Carl XVI Gustaf and Queen Silvia and where they conduct royal business. Many will also recognise Stockholm Palace from the wedding reception of Crown Princess Victoria to Prince Daniel.

Designed in the Baroque style and formed as a Roman palace, it is one of the largest in Europe; it was designed by architect Nicodemus Tessan. The Royal Palace has seven floors and over 600 rooms. The Royal Apartments, the Bernadotte Library, Royal Chapel, Royal Gift Shop, the Treasury, and different museums are all located inside. It was completed in 1760 after construction began in 1697.

These rooms are used for receptions by the Swedish Royal Family, and this is where cabinet meetings are also held – like the ones held after the birth of the King’s grandchildren where he announced their names and titles. The Royal Apartments also contain a banquet hall for gala dinners. Foreign dignitaries on official state visits stay guest apartment; The Hall of State with Queen Kristina’s silver throne and the Apartments of the Orders of Chivalry (houses the permanent collection of royal orders) are housed here, as well. The Hall of State was transformed in 2010 for the wedding banquet of the Crown Princess and Prince Daniel.

It houses approximately 100,000 books that have been owned by previous monarchs of Sweden. According to the Royal Court, “[It] also contains the Bernadotte collection of photographs consisting of more than half a million photographs.” Construction of the library was completed in 1796 and had originally been planned to be used as the Swedish National Library. The original library in this location burned down in 1697.

Many will recognise the Royal Chapel from the recent weddings of Princess Madeleine to Christopher O’Neill (2013) and Prince Carl Philip to then Sofia Hellqvist (2015). It was also used for the christenings and Te Deum ceremonies for the two children of Crown Princess Victoria and Prince Daniel: Princess Estelle (2012) and Prince Oscar (2016).

The Royal Chapel is one of the oldest parts of the palace; since the 1200s, there has always been a Royal Chapel and clergy for the palace. The 1600s saw the inclusion of the Royal Parish; these people include the employees of the Royal Court and their families who are invited to worship there each Sunday morning.

The current chapel’s interior was completed by Carl Hårleman in the 1700s following the drawings of Tessan. The Royal Court has said, “Sculptures, statues and ceiling paintings have been carried out by the foremost craftsmen of the period.” It is open to visitors twice a week.

Located in the vaults of the Royal Palace, the Treasury contains the regalia, which are the most important symbols of the Swedish Monarchy. Before 1970, people could only see the regalia at the opening of parliament. Items on display include King Gustav Vasa’s sword of state, Queen Lovisa Ulrika’s crown and King Erik XIV’s crown, sceptre and orb. You can also view the baptism font used in all the royal baptisms; the next time it will be utilised will be for the christening of Prince Carl Philip and Princess Sofia’s second child, due in September.

The Royal Court said, “Everywhere you look you will see fascinating and exclusive art, steeped in exciting history.”

The Tre Kronor Museum, on the ground floor of the northern wing, is dedicated to what was called the Tre Kronor Palace which was believed to have been partially built by the Vikings in the 900s; it was destroyed in 1697 by a fire. Some objects were able to be recovered from the burnt palace and are on display at the museum. It is accessed by going through ” the five-metre-thick defence wall from the 1200s,” explained the Royal Court on their website. It is open year-round.

The Gustav III’s Museum of Antiquities first opened in 1794 and is one of the oldest in Europe. It contains sculptures bought by King Gustav III on his travels in Italy. There are over 200 sculptures in the museum in two stone galleries in the northwestern wing. On their website, the Royal Court stated, “The sculptures are placed in the gallery exactly as they were originally exhibited.” This museum is only open during the summer.

Various sculptures are included around the palace. On the eastern row of the palace, there are bronze sculptures made by Johan Axel Wetterlund. There are waterfalls with plaques above them; one is dedicated to King Oscar II and King Charles XII.

The Royal Gift Shop is also on the grounds for visitors to purchase souvenirs after their tour. Items can also be purchased through their online store. However, the website is under reconstruction and will be back online sometime this year.Stockholm Palace is open year-round with hours varying depending on the season. It is only closed on Christmas Eve and Christmas Day. Adult admission is SEK 160, children 7–17-years-old and students are SEK 80 and children under seven get in free with a guardian. For more information and to purchase tickets, please visit the Swedish Royal Family’s website.