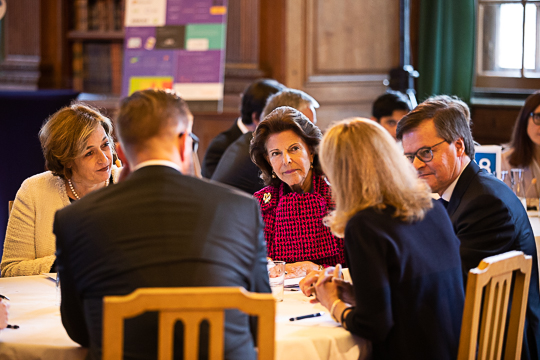 On Wednesday, members of the Swedish Royal Family attended a major event regarding the Global Child Forum at the Royal Palace in Stockholm. The event in the Bernadotte Library was attended by His Majesty King Carl XVI Gustaf, Her Majesty Queen Silvia and Their Royal Highnesses Crown Princess Victoria, Prince Daniel and Princess Sofia

His Majesty the King gave a speech where he said: “Today, we commemorate these two anniversaries by shining a light on a most urgent issue: How can we use artificial intelligence as a catalyst for child safety online? New technology in itself is not good or bad. However, as we all know, it can be used for good or bad purposes.”

The event was attended by 40 Swedish and international experts from the business community, academia, law enforcement agencies and child protection organisations. During the day, lectures were held interspersed with roundtables to discuss how child safety online can be increased. Experts lectured and talked about how artificial intelligence can help fight sexual abuse against children.

Her Majesty the Queen gave a speech where she stated: “We need for advanced technology to be developed with a child safeguarding perspective in mind. By people and companies that not only look at profit, but who are willing to take responsibility for how their technology is used or misused. This is especially important when it comes to AI [Artificial Intelligence]. Even those of us who do not understand the complexities of Artificial Intelligence, we at least understand that with such a powerful tool – we cannot afford to fail. We need to make sure that it is right from the start.”

The conference was organised by the Global Child Forum and the World Childhood Foundation which Queen Silvia founded in 1999. Last week, the Queen attended a conference on the same theme with Childhood at the Vatican where she also met the Pope.

The Global Child Forum was initiated by the Royal Family in 2009 and is an independent platform that brings together world-leading stakeholders for in-depth dialogue and increased knowledge of children’s rights. The goal is to identify solutions to the most pressing issues regarding companies opportunities to influence children’s rights.